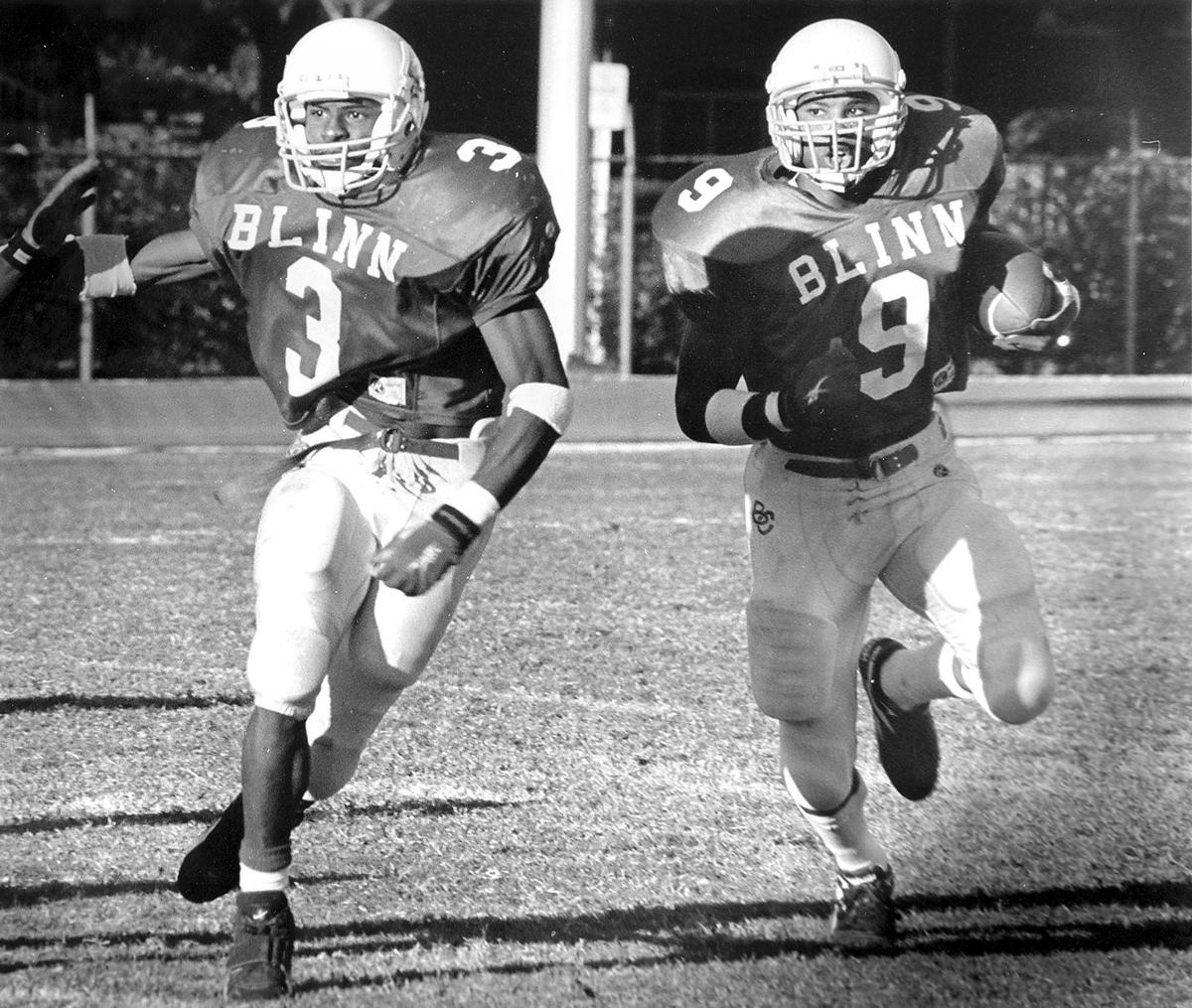 Sophomore Terrell Sutton (9) runs with one of his four interceptions against Ranger with freshman Brandon Harrison (3) as a blocker in 1995. 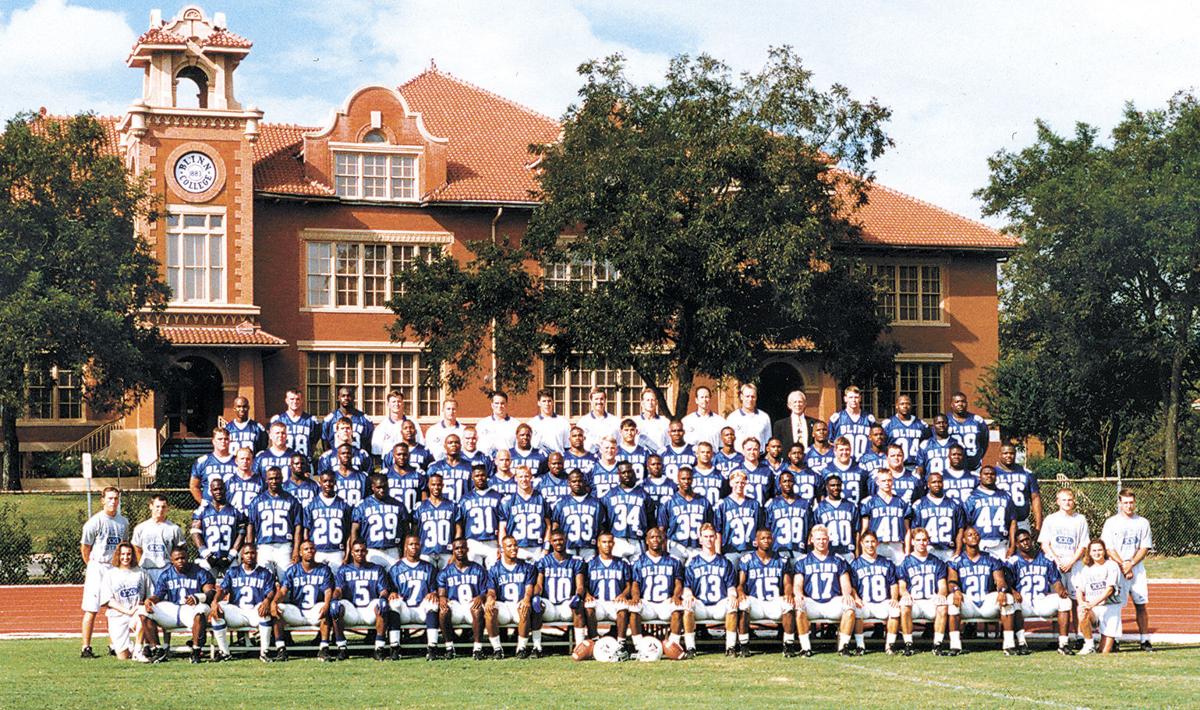 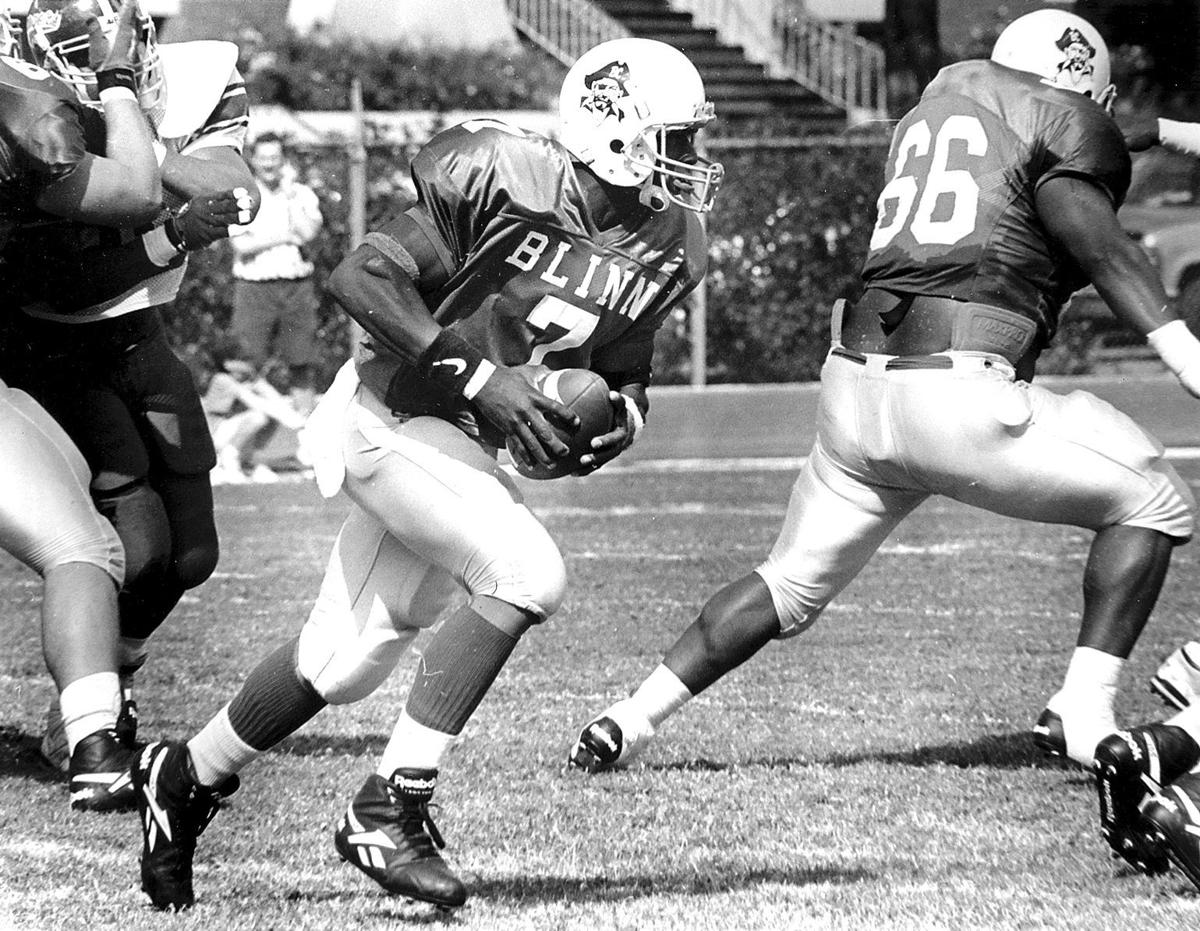 Freshman Michael Bishop burst onto the scene in 1995 as a dual-threat quarterback who helped lead Blinn to an undefeated national championship season. 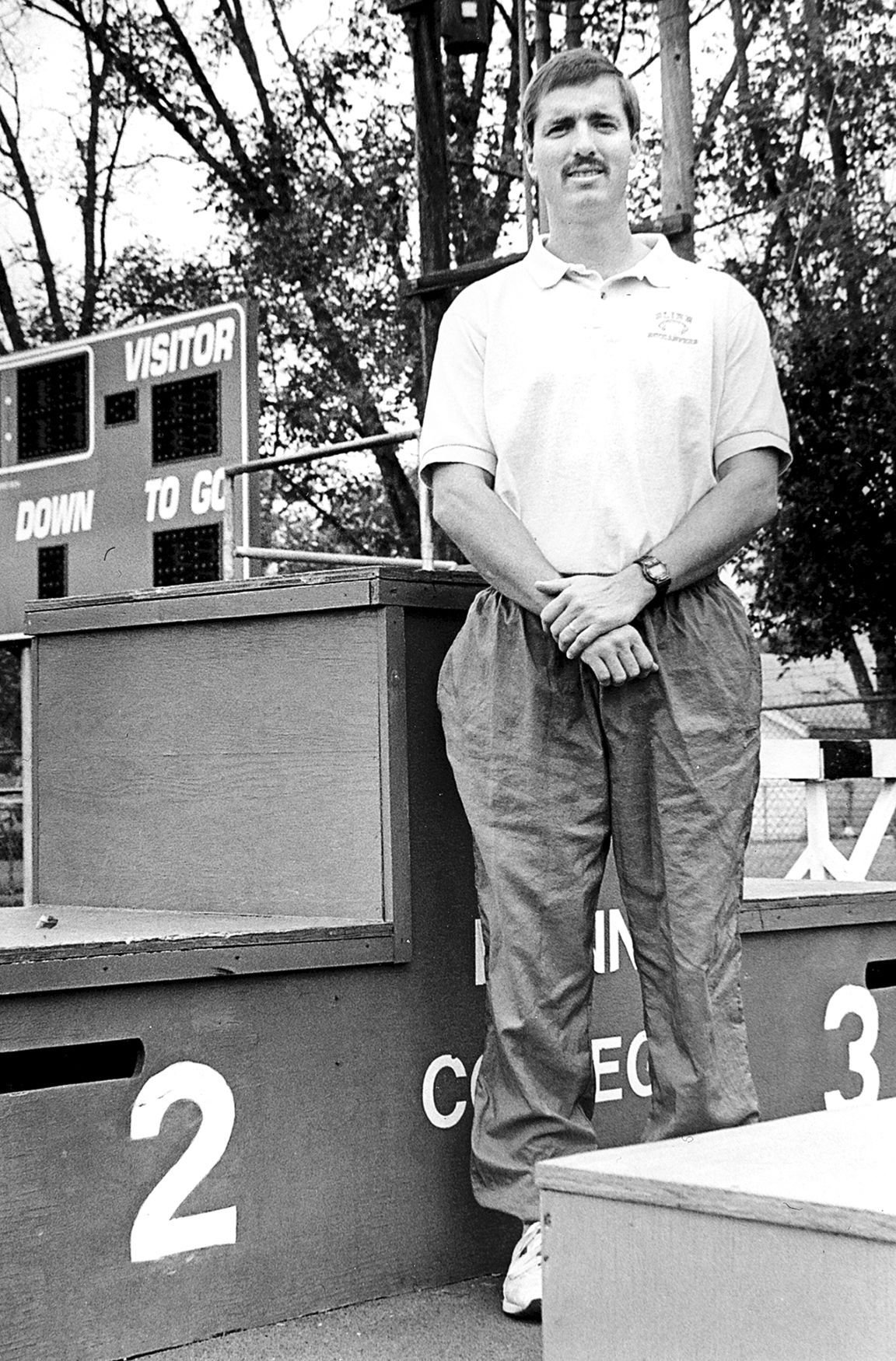 Blinn College head coach Willie Fritz made an instant impact on the football team when he was hired in 1993. He led the Bucs to back-to-back national championships in 1995 and 1996.

Part 1 of a two-part series

After the second game of the 1995 season, Banner-Press sports editor Bruce White asked, “… just how good are these Bucs?”

He had good reason to ask. He had just watched Blinn “destroy” Cisco in its home opener. That followed an easy victory over a Hardin-Simmons varsity/JV mixed squad. And both of those wins came after a 1994 campaign in which the Bucs finished 9-2.

Blinn’s only losses in ‘94 were to eventual national champion Trinity Valley and to Hinds College in the Mineral Water Bowl at the end of the season. The defeats proved to be fitting — the Bucs would exact revenge on both schools in 1995.

“I remember when we played Trinity Valley (in 1994), they were undefeated, we were undefeated and we packed Spencer Stadium,” former Blinn head coach Willie Fritz said. “I had to bring in portable bleachers. It was standing room only all the way around the track.”

The seeds of the 1995 and 1996 teams were planted in 1993 when Blinn hired 33-year-old Fritz to lead its team. It was Fritz’s first job as a head coach and his task was to flip a program that had gone 5-24-1 in the three season prior to his arrival.

When former Blinn College head coach Willie Fritz holds a staff meeting these days, there could be 30 people in the room: full-time coaches, graduate assistants, analysts, coordinators and directors of everything from player development to video operations. That’s the setup at Tulane University in New Orleans where he has just finished his second season as head coach.

But in the mid-1990s at Blinn, there were eight coaches, including Fritz. They were responsible for every detail of the football program. They were all young and full of vigor. It was Fritz’s first job as a head coach and he and his staff went all-in on the process.

“It was a fun time and we were so into it that we didn’t realize we were working 100 hours per week and in the offseason we were working about 80,” Fritz said. “That’s just how we did it.”

The hard work and dedication paid off immediately. The Bucs won more games with the new staff in 1993 than they had in the previous three years combined. They were so close to a national championship in 1994 that they could taste it. In 1995 they put it all together for a perfect season and by 1996, they were teaching classes in football dominance.

The Bucs cruised through the first three games of 1995 behind a good offensive line, a workhorse running back in Vaughn Inniss and a freshman quarterback named Michael Bishop. The description “dual-threat” didn’t exist for quarterbacks in 1995, but an argument can be made that Bishop was the prototype for the model of quarterback we now refer to as dual-threat — a player who is equally dangerous running and passing.

“(He was) tough, competitive and physical — you don’t really say those words with quarterbacks very often,” Fritz said. “He was one of the first running-type quarterbacks. He’d be unbelievable on offense today, with triple options and zone reads and throwing the ball.”

The 1995 defense featured a list of stars as long as their offensive counterparts. The unit was led by lineman Kenneth Bouie, who would finish the year as a First Team All-American, and defensive back Terrell Sutton, who would be an All-American honorable mention.

So, by the third game of 1995 — a 37-10 romp over Tyler in which the Blinn defense allowed just 128 yards — it was clear that the Bucs’ offense and defense were in sync. The fourth game of the year was Bishop’s early shining moment. Blinn fought off a challenge by perennial conference contender Navarro and downed the Bulldogs 28-15 to move to 4-0.

The game was a low-scoring slugfest until there were five minutes left to play. Blinn led 19-15 and it had been a struggle. The Bucs faced a third-and-15 from their own 28 yard line. A punt would give Navarro good field position and a chance to drain the clock for a game-winning touchdown.

But Bishop combined all his talents into one play. He took the snap and immediately faced pressure. He retreated 18 yards back to his own 10 yard line before slicing between the two defenders who were chasing him and sprinting upfield. The Navarro pursuers slammed into each other and Bishop left them in his dust.

He launched the ball downfield to sophomore receiver Chris Brazzell, who had worked back toward his imperiled quarterback. Brazzell out-jumped two defenders and caught the ball at the Navarro 40 yard line. The catch was great, but then he outran the defenders to the end zone to secure a 28-15 lead for the Bucs. The score held and Blinn survived its first challenge of the year.

The next came three games later when Blinn traveled to Athens, Texxas for the first of two revenge games of the season. In 1994, the Bucs’ only loss of the regular season was to Trinity Valley, a team that went on to win the national championship. TV came from behind on Blinn’s home field to knock the Bucs out of the conference championship game and national title contention.

In the 1995 rematch, Blinn entered at 7-0 and No. 4 in the nation. TV was 3-3, but it had home field advantage. The Cardinals used successful trick plays and forced three huge turnovers to keep the Bucs in check for three quarters of the game.

The teams were locked in a 10-10 tie at the beginning of the fourth quarter. Blinn’s offense took center stage first — the Bucs marched 84 yards on seven plays for a touchdown. But the extra point went wide and they only led 16-10 after the drive.

Blinn defensive back Jamal Davis stopped Tyler’s ensuing drive with an interception, and then he did it again. As the game wound down, the Cardinals had the ball with one final chance to score. Davis made his second interception of the quarter and this time he took it back for a TD. Inniss ran in the 2-point conversion and the Bucs went back to Brenham with the 24-10 win.

The victory also secured Blinn a playoff spot. The Bucs blasted Kilgore the following week behind a record-setting performance by Brazzell. The sophomore had 237 receiving yards and three TDs on eight catchs. Blinn then escaped Northeastern Oklahoma A&M with their No. 1 ranking in tact. The wins set up an in-season rematch with Trinity Valley in the first round of the conference playoffs.

The second go-round would not be as close as the first. Blinn pummeled TV 37-7 and went on to crush Cisco 51-19 to win the Texas Junior College Football Conference championship with an undefeated 10-0 season.

The Bucs earned a berth in the Texas Shrine Bowl against 10-1 Hinds College from Mississippi, the team that beat them in the Mineral Water Bowl at the end of the previous season. Blinn conquered Hinds 21-14. As Bishop took a knee in the victory formation to end the game, Blinn fans counted down the seconds on the clock. At the final whistle, they swarmed the field at Tyler Junior College.

“This is everything we’ve talked about since last spring,” said Chris Brazzell, who had four catches for 63 yards and a TD in his final game as a Buc.

Blinn finished 12-0 and was the favorite to be declared the national champion. Defensive lineman Kenneth Bouie was named the game’s MVP. Fritz was the conference’s coach of the year and Bishop was named the offensive MVP. A total of 11 Blinn players earned First Team All-Conference honors.

“We knew they were good and we knew we had to play hard to beat them,” Fritz told the Banner after the game. “But we felt like we had something to prove. They beat us last year and we thought a lot about that. But mostly, we wanted to win a national championship.”

White opened his final column of the season with this paragraph:

“Think back. Was it really just four football seasons ago when the Blinn football program was scraping the bottom of the Texas Junior College Football Conference?”