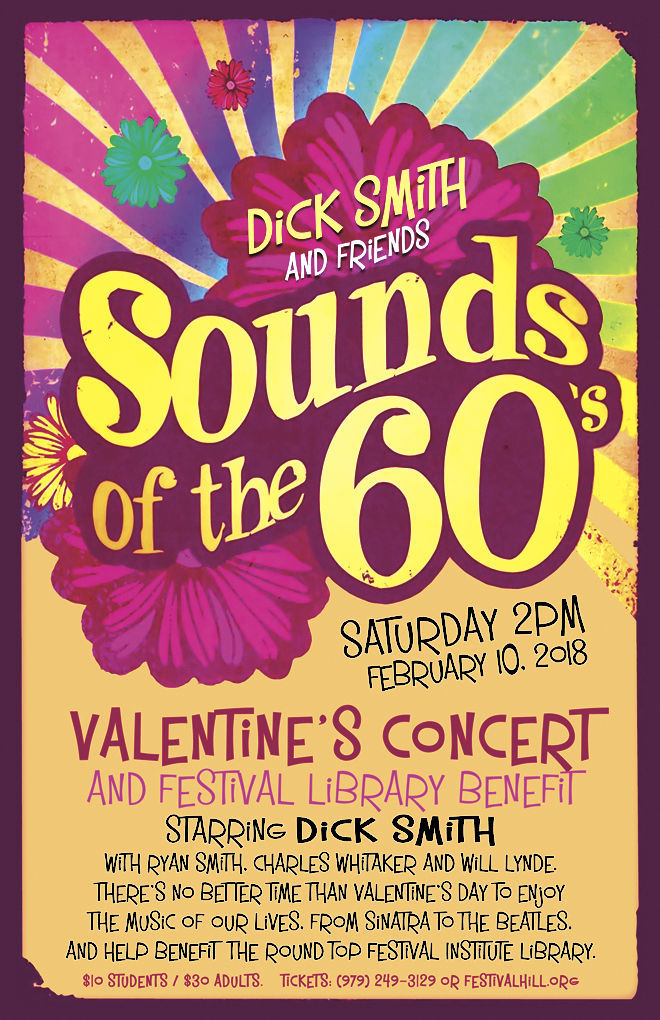 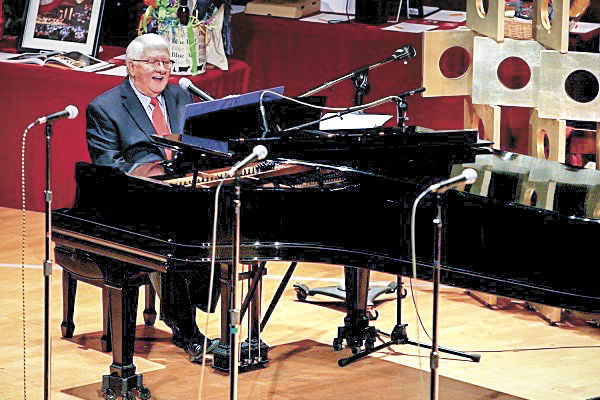 Dick Smith performs during the annual Valentine’s Day concert at the Round Top Festival Hill institute.

Dick Smith performs during the annual Valentine’s Day concert at the Round Top Festival Hill institute.

For those who love the music of the 1950s and 1960s, this is your week. The Broadway show “Million Dollar Quartet” will revive Elvis Presley, Johnny Cash, Jerry Lee Lewis and Carl Perkins at Blinn College and the Round Top Festival Hill Institute will resound with songs from the Beatles, Frank Sinatra and many others.

The annual Valentine’s Day concert at the institute will present “Sounds of the 60s” this year. Dick Smith returns to host the event from his position behind the Steinway piano and he recruited a group of family and friends to join him.

Vocalist Charles Whitaker has signed on for another year. He and Smith were music majors together at the University of Houston “way back in 1843,” as Smith likes to joke. Smith’s daughter, Ryan, has traditionally participated but this year she will on the Kleberg Stage at the Zach Theatre in Austin in the title role of “Esther, A New Musical.”

Smith mined his family’s musical roots for additional performers and found a trio in Nashville to support the show. Smith’s brother, Gary, is a singer and songwriter in the country music capital. Gary’s grandson, Will, and Will’s girlfriend, Arden, will round out the quintet.

The annual concert didn’t really begin as a concert at all. The first show in 2005 was just Smith playing the piano for a small group of viewers in the Edythe Bates Old Chapel. Its popularity grew steadily to the point where the institute’s founder, James Dick, informed Smith the show would have to move to the concert hall.

“And I said, ‘Oh darn, you mean I have to play on that beautiful Steinway piano in that wonderful hall?’” Smith laughed.

For the last three years, the show has virtually sold out the concert space. This year, organizers expect strong attendance again. The performers are breaking out the hits for a trip down nostalgia lane.

Previous concerts centered on Gershwin, show tunes and the great American song book by singers like Sintatra. This year, the songs will highlight the era that changed music forever.

As Smith said, “We’re going to do some songs everybody knew when we were all in high school and having fun and driving a ’47 Chrysler.”

We Do It All Landscaping Tree Trimming & Removal, Fence