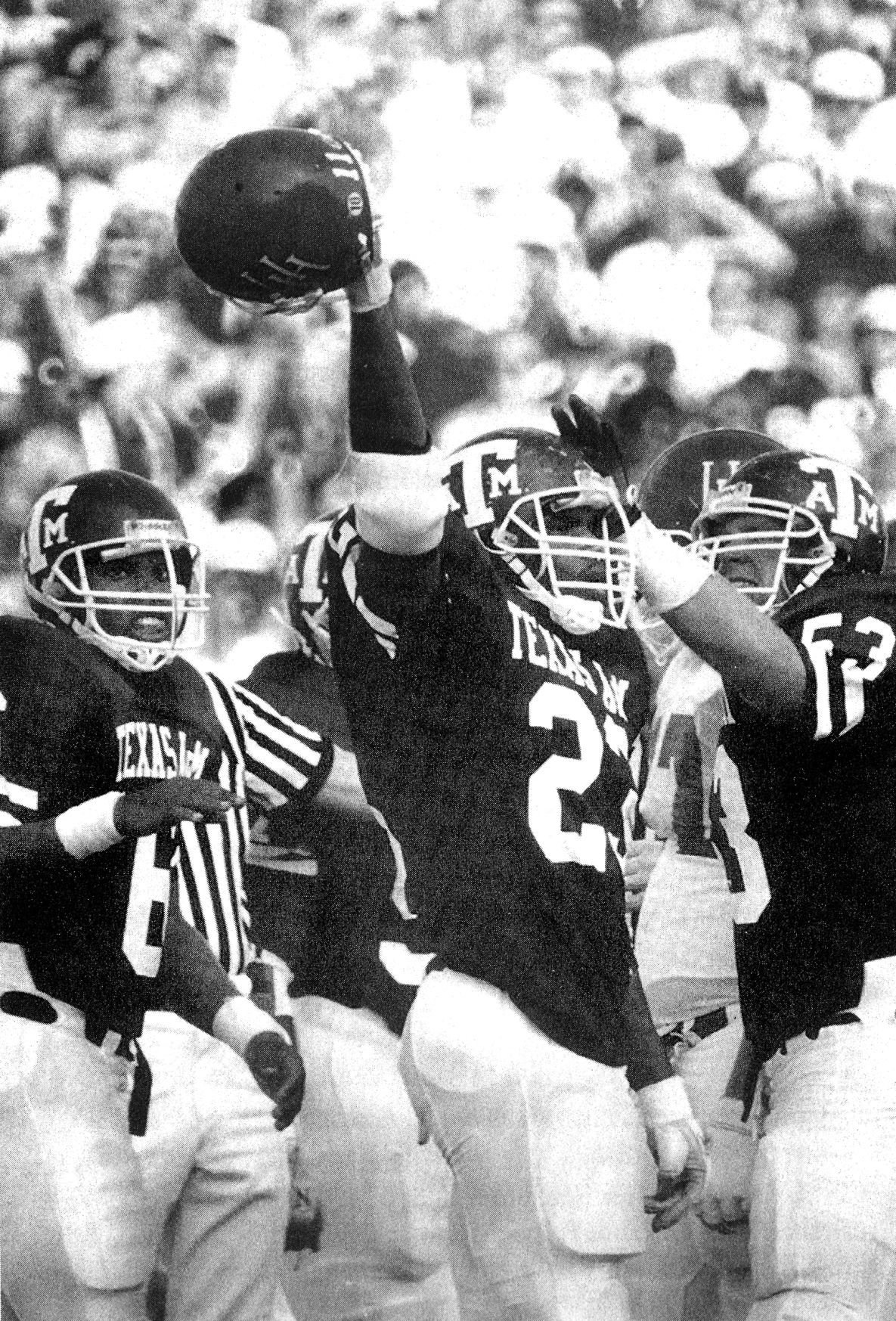 Texas A&M linebacker Aaron Wallace raises the helmet of Houston quarterback Andre Ware after a sack that would become one of the most iconic images in Aggie history. 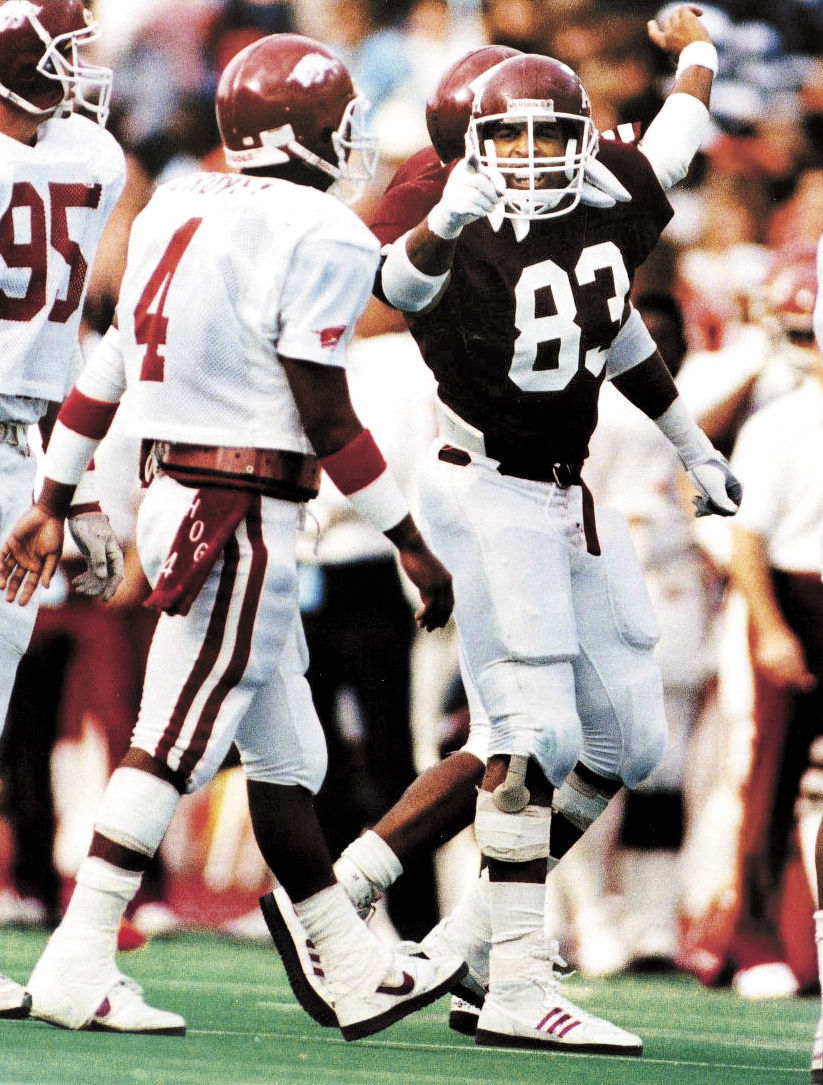 John Roper was one half the Blitz Brothers in 1988. 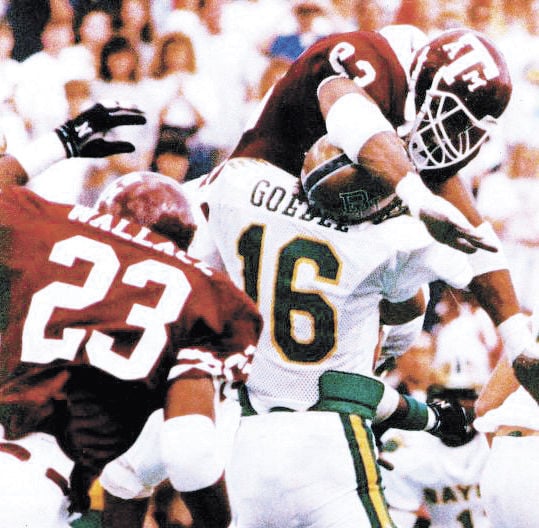 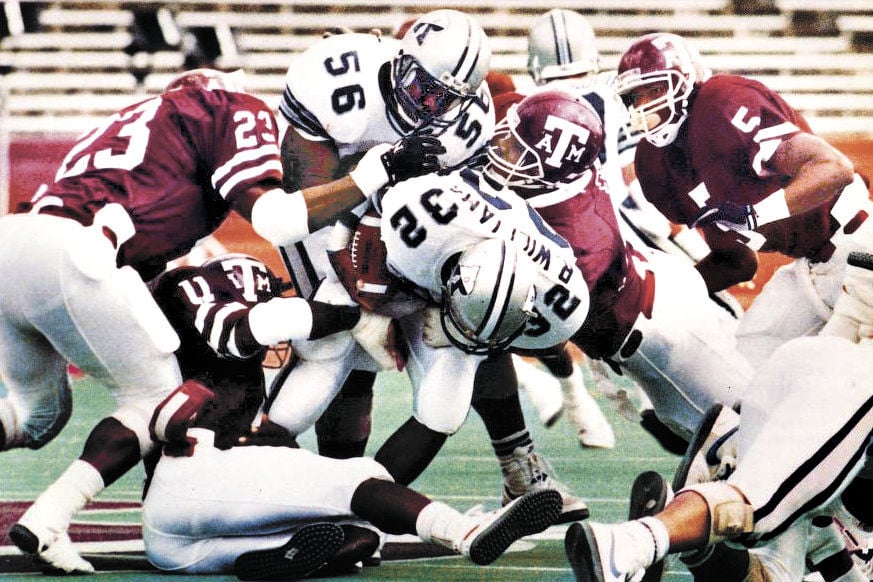 The Aggie defense swarms Rice running back Richard Williams in 1988.

“They think they’re coming up here for a track meet, but we’re going to introduce the run-and-shoot to the blitz-and-destroy!” Aggie head coach R.C. Slocum bellowed into the microphone.

The 40,000 fans at Kyle Field for Midnight Yell Practice rose up and screamed in response.

That was Friday the 13th — Friday night, Oct. 13, 1989. The next day, linebacker Aaron Wallace treated Texas A&M fans to one of the most iconic images in Aggie history.

The University of Houston’s aerial show known as the run-and-shoot offense brought its circus to College Station at the halfway point of the season. The Cougars had outscored their opponents by an average of 59 to six.

But Slocum, in his first year as head coach, and defensive coordinator Bob Davie were having none of it. Behind closed doors, they were mad scientists huddled over bubbling beakers and frothing concoctions as they devised a new strategy to counter Houston’s offensive speed.

As we dive back into the 1980s, let’s set the stage a little bit. If you were there, you remember — the fashion and hair styles were horrendous. Maybe the worst in history.

Football shoulder pads were enormous. Jerseys were not.

In the college football world, Oklahoma linebacker Brian Bosworth had exemplified all of the above in 1985 and 1986. But for fans and pundits who weren’t caught up in the hoopla of Bosworth, there was a set of four linebackers in College Station who could match any in the country.

The NFL thought so, too. After the 1986 season, all four starting linebackers from Texas A&M were drafted: Johnny Holland in the second round, Todd Howard in the third, Larry Helm in the fourth and Steve Bullitt in the eighth round.

The 1987 season looked like a rebuilding year for the linebacking corps in Aggieland. Four new players had to step into starting roles, but as the college football ranks were about to see, there wouldn’t be a drop in quality.

Dana Batiste, Adam Bob, John Roper and Aaron Wallace took over the jobs. Wallace, a sophomore, was the youngest of the group. But age and inexperience wouldn’t be large obstacles to overcome. After all, they had three head coaches to instruct them.

Jackie Sherrill was the current head coach in ’87. R.C. Slocum was the defensive coordinator and would ascend to head coach for the pinnacle of our story in ’89. Bob Davie was the outside linebackers coach until he was promoted to DC under Slocum. Ten years later, he would be the head man at Notre Dame.

That was quite a trio of tutors for a burgeoning quartet of linebackers and the coaches had the perfect philosophy for them: play fast, play hard, play with reckless abandon.

With Batiste and Bob in the middle and Roper and Wallace on the edges, they stormed over offenses in 1987 and rode a 10-2 regular season record to the Cotton Bowl where they trounced Notre Dame (and Heisman trophy winner Tim Brown) 35-10.

The next year, things really went wild. Roper and Wallace racked up sacks at levels that would be historic by the time their careers were finished. The Aggie coaches and the sports information department dubbed them the Blitz Brothers and, as Wallace said, “That took on a life of its own.”

When Roper left A&M for the NFL after the 1988 season, he was second in the Aggie record books with 36 sacks. His total placed him just one behind leader Jacob Green, a defensive end from 1977-1979.

But the individual successes came amidst a season mired by a recruiting scandal that forced Sherrill out of College Station in December. Slocum was promoted to head coach and then he promoted Davie to defensive coordinator.

Aggie legend John David Crow took over the athletic department and thus a new triumvirate assembled for the 1989 campaign.

Roper, Batiste and Bob were drafted into the NFL after the 1988 season. In the fall of ‘89, Wallace had a new batch of wrecking crew mates. He partnered with new starting outside linebacker William Thomas to wreak havoc on opposing backfields, especially quarterbacks.

And so Houston’s seemingly unstoppable offense arrived in College Station riding a streak of five consecutive blowouts. The Cougars were led by a head coach who was familiar to Aggie fans, to say the least. Jack Pardee was one of the famed Junction Boys and one of the stalwarts on Bear Bryant’s teams at A&M.

Pardee embraced the new high-flying offense and until Houston went to College Station, it seemed like the Cougars would roll through the Southwest Conference.

“I honestly don’t think anyone can stop us,” Houston QB Andre Ware said before the game. “The only time our system doesn’t work is when we make mistakes and beat ourselves.”

Slocum and Davie devised a defensive strategy for the game that proved Ware wrong. It relied on speed and relentless blitzing. They replaced slower defensive linemen with linebackers. They replaced linebackers with defensive backs. And they blitzed Wallace and Thomas off the edges all day.

“They think they’re coming up here for a track meet, but we’re going to introduce the run-and-shoot to the blitz-and-destroy!” Aggie head coach R.C. Slocum bellowed into the microphone.

It worked. Thomas racked up 16 tackles, three and a half sacks and two forced fumbles. But it was a sack by Wallace that stole the show.

In the fourth quarter, the Aggies were defying the odds and led 17-13. Houston had the ball and Ware dropped back to pass.

Wallace bullrushed an offensive lineman and plowed his way into the backfield. He grabbed Ware and pulled him to the ground for a sack. It was a record-tying accomplishment — Wallace had just equaled Green’s 37 sacks.

But the play wasn’t done. As Wallace rose from the turf, he realized he had Ware’s helmet in his hand. He had ripped it off the QB’s head without fully realizing it.

Kyle Field was pandemonium. Then, in a display unusual of Wallace, he raised the helmet in the air. The crowd roared its approval the way crowds have done since gladiators stood victorious upon the sands of the Roman Coliseum.

“When I pulled him forward, the helmet just came off and without even thinking about it, out of the exhilaration of the moment, I just held it up,” Wallace told TexAgs.com in 2016. “It just seemed right at the time. It wasn’t planned, I never thought about it.”

It was essentially the end of the day for Ware and the Houston offense. The Aggies won 17-13 and held the Cougars’ future Heisman Trophy winning QB to just 247 yards passing and 1 touchdown. He was sacked six times and threw three interceptions.

Houston’s point total was by far the lowest of the season. The next game, the Cougars scored 95 against SMU. In their only other loss of the year — to Arkansas two weeks after the defeat at A&M — they still put up 39 points.

The Aggies finished 8-4 that season and Blitz Brothers passed into legend. Wallace broke Green’s record and is now the all-time leader at Texas A&M with 42 sacks. He was drafted by the Raiders in the spring of 1990 and made the NFL All-Rookie team with nine sacks. He played eight years in the league.

He now lives in Frisco, where people still stop him and ask about the “Andre Ware play” 28 years later.

”Game of my Life” by Brent Zwerneman