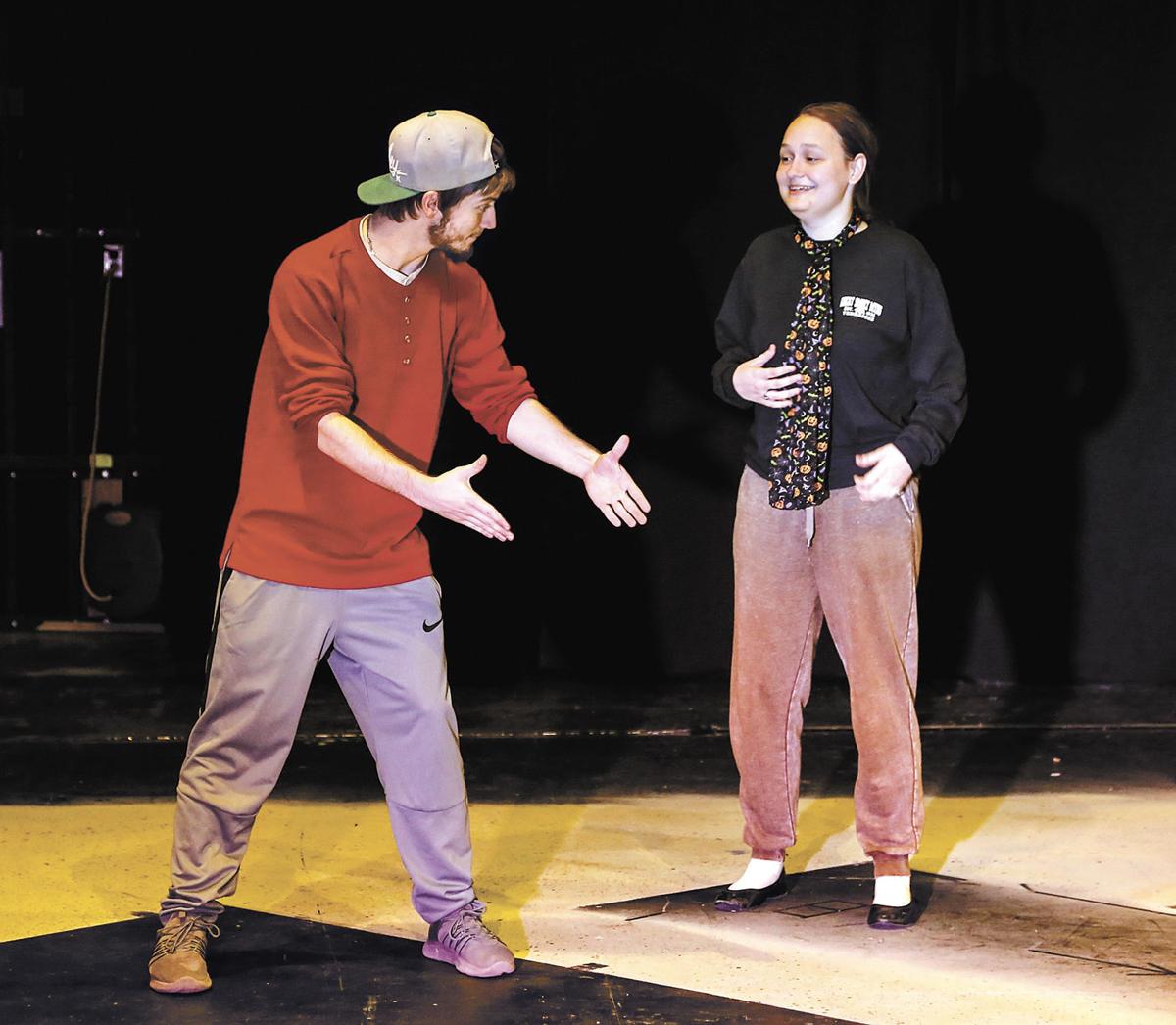 Zach Hopkins (left) and Kaylee Reidenbach improvise a scene during a rehearsal for the troupe’s upcoming performance. The show begins at 7 p.m. on Thursday and is free to the public. 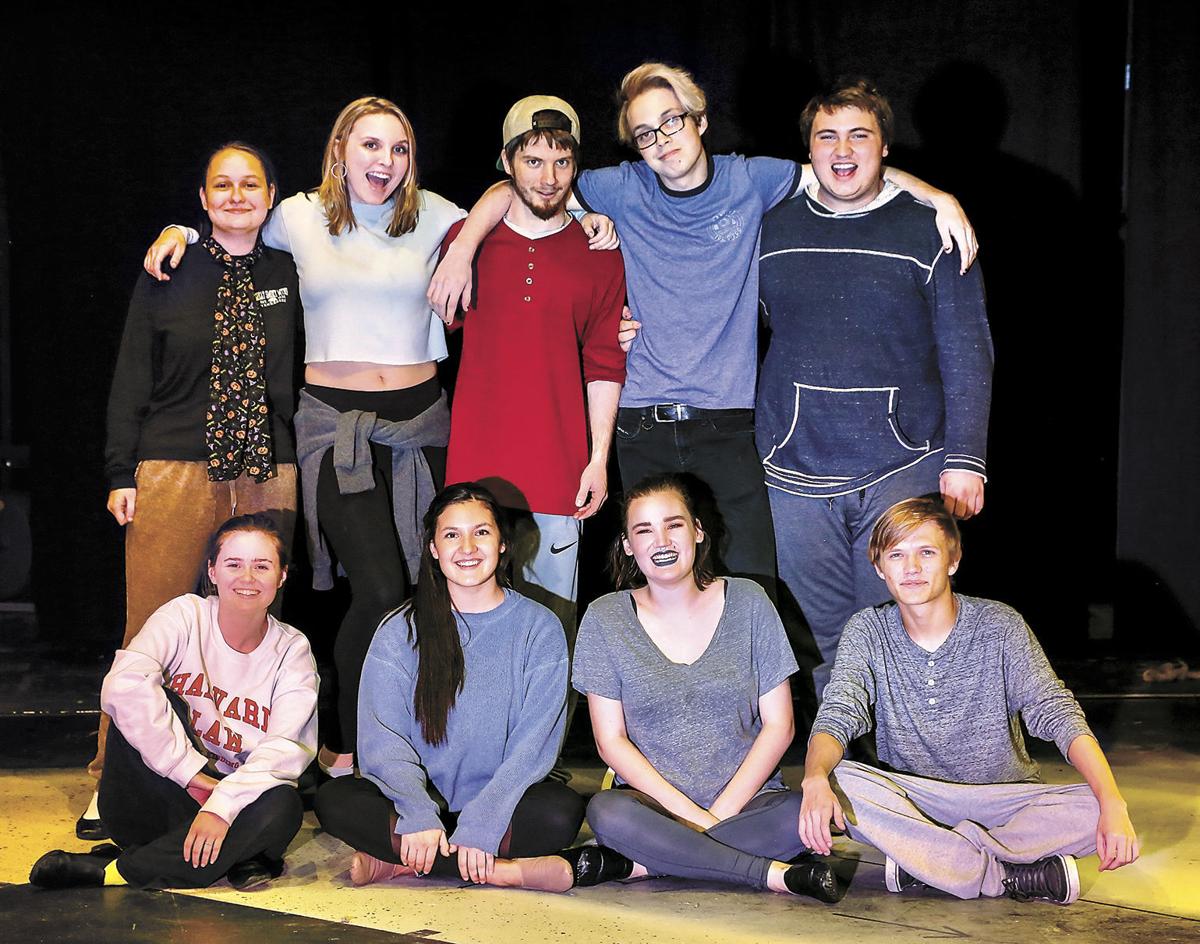 Zach Hopkins (left) and Kaylee Reidenbach improvise a scene during a rehearsal for the troupe’s upcoming performance. The show begins at 7 p.m. on Thursday and is free to the public.

For most people, trying to think of something funny to say while countless pairs of eyes are staring at them is far from fun and games. But that’s exactly what it will be for the members of Slaphappy, Blinn College’s improvisation troupe led by co-captains Eva Kirby and Zach Hopkins, during their free performance for the public this Thursday.

“It will be improvisation games, they’ll include the audience, they’ll get a lot of things going that way,” said Brad Nies, the Theatre Arts Director at Blinn and sponsor of Slaphappy. “It’s all complete improv. They practice the games so that they know how to play them, but when you get into a situation like this, especially when the audience is giving them ideas throughout it, they have to figure things out on their own. And they do.”

“It’s really great,” said Kirby. “It’s more complex games, but we make sure we get input from the audience. The audience’s energy is what feeds us.”

“If the audience is feeling good, that means they’re going to give good suggestions to certain things, which makes the scene even better and even funnier,” added Hopkins.

The troupe was formed by a Blinn student three years ago. “I had a student who had done improv in high school,” explained Nies. “And he told me he would love to start something like that here. And at first I said, ‘Okay, let me check into it.’ So I did a little checking around, and I found that there were a lot of theatre programs in Texas that have improv troupes. So, we went through Delta Psi Omega, our theatre organization, and we were able to put together a troupe of people. And it really took off.”

Hopkins and Kirby, the current co-captains, are both sophomores majoring in Theatre Arts. Both joined the group last year, and Hopkins was a co-captain last semester as well.

“It’s such a fun experience,” said Kirby. “And it’s also good to develop your acting.”

“It gets you to think off the top of your head,” added Hopkins. “It develops those skills where, if something goes wrong on stage, you can improvise and keep the scene going.”

As co-captains, Kirby and Hopkins are in charge of organizing the group and structuring rehearsals. “We figure out which games to do and not do, and which people to put in certain games,” said Hopkins. “We switch things up to where it doesn’t get old, so new ideas can come up.”

The troupe has been busy preparing for the upcoming performance. “We’re just doing games like crazy,” said Kirby. “Everybody has their partners. We’ve been practicing since the beginning of the year, so that way, everyone isn’t so stressed about it.”

The troupe is open to Blinn students of any major who are members of the theatre arts organization Delta Psi Omega. The other students in the troupe are Blake Brown, Megan Flores, Dave Harris, Nicki Pinter, Tyler Regan, Kaylee Reidenbach and Tyler Roberts.

“We all love each other,” said Kirby. “That’s why the people in this troupe are so great, because there is no judgment at all. If we mess up, we try to build each other up.”

“Everyone in the troupe brings out such good ideas, and they work well together,” said Hopkins. “Everyone gives and receives in a good way to where it makes the whole thing enjoyable.”

“People should come see the performance to get a laugh,” said Kirby. “It’s so spontaneous, and it brings joy to watch it, it brings joy doing it. I think the thrill of not knowing where it’s going to go is one of the best things about it.”

“It’s a stress reliever for the people doing it and the people watching it,” added Hopkins.

“It’s just a fun evening. It’s really really funny, the things they come up with,” said Nies. “The way they get the audience involved is just really exciting.”

The performance is this Thursday at 7 p.m. in the auditorium of the W.W. O’Donnell Performing Arts Center on Blinn’s Brenham campus. Admission is free, and tickets are not required. The group is also planning a performance for March 28, 2019. For more information, call 979-830-4024.