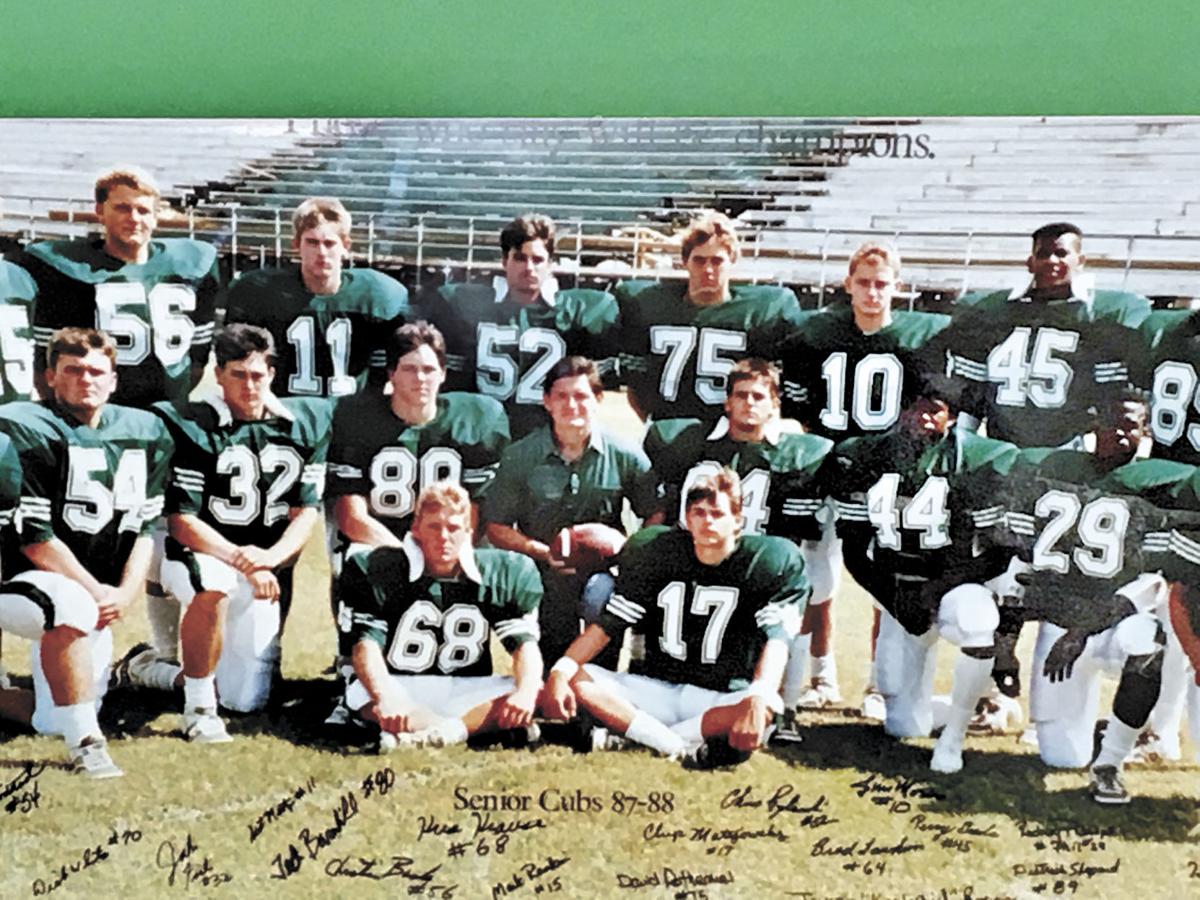 A picture of the 1987 seniors, signed by each player, hangs in the home office of head coach Mark Elam. 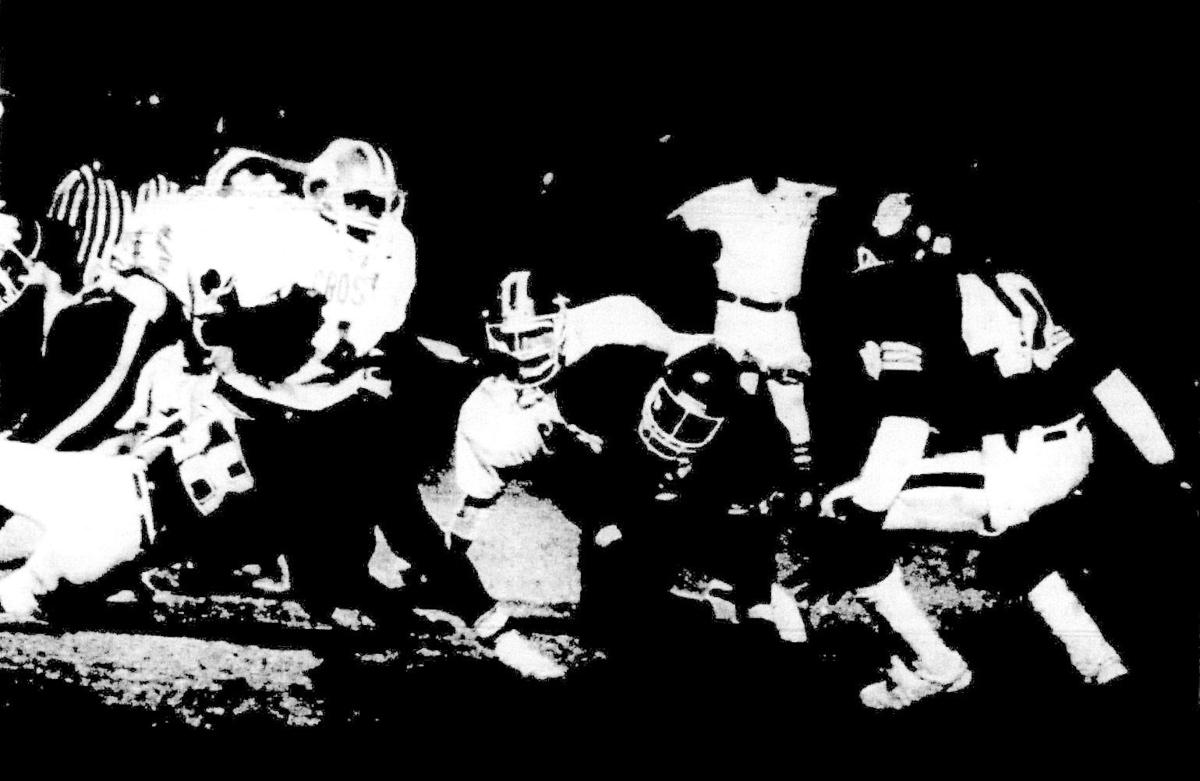 Crosby running back James Cartwright, who rushed for 335 yards on 30 carries in the loss, runs into a tackle by Brenham defender Willard Walker. 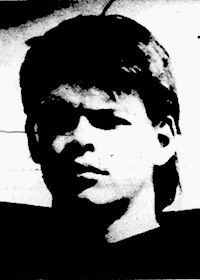 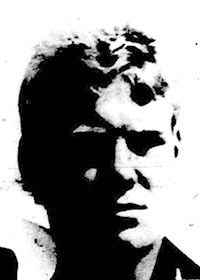 The comeback started when the Cubs trailed 38-6 in the third quarter.

At the time, it wasn’t a comeback at all. It was simply the second touchdown for Brenham on a night that had been miserable up to that point.

Cubs quarterback Chip Matejowsky had a friend in the stands who called it quits early. The fan had seen enough. But as he drove home, he listened to the game on the radio and Brenham began to mount what might be the greatest comeback in school history.

Matejowsky’s friend quickly turned around. He floored it back to the stadium. He arrived in time to participate in the celebration that erupted in brand new Cub Stadium when Brenham overcame a 32-point deficit to beat Crosby 48-45.

The fall of 1987 was not dull, to say the least. There were tensions in the Middle East between Iraq and Iran. NFL players went on strike in mid-September to fight for something new in professional football: free agency.

And Brenham High School opened a new football stadium as it began the defense of its first zone title in 14 years. The Cubs won the zone in 1986 and beat Crosby twice that season to do it.

In 1987, head coach Mark Elam liked everything about his team. He had playmakers on both sides of the ball and had a special rapport with his senior class.

Elam took over the program in 1984 and the 1987 seniors were the first group he and his staff had coached for all four years. Chip Matejowsky was the quarterback. Junior Willie Bimage was his backup.

Split end Jahn Finke was back after leading the team in receiving yards the previous year. Tailback Rodney Phillips gutted through 1986 season with a sprained ankle, but he was strong and healthy to begin the 1987 campaign.

Perry Deeds was slated to be the tight end after backing up Second Team All-State performer Allen Rosebaum in 1986, but he generously moved to defensive tackle to bring age and playing experience to a young line. His transition opened the door for Ted Barnhill to step into the tight end spot.

“It may take us a little while to get everything together,” Elam told The Banner-Press before the season. “The kids just don’t have the experience, but they are all real good athletes and I think we could have a real outstanding defensive team after it’s all said and done.”

The defense played well as the Cubs won their first three games versus Bellville, Wharton and Navasota. Those wins set up the third meeting with Crosby in 12 months. Brenham had pounded the Cougars 30-8 in the Bi-District playoffs the previous year — called the “zone” round at the time — and Crosby was itching for the rematch.

“I think they came out fired up and really ready to play,” Elam said in retrospect.

They were and they did.

Crosby running back James Cartwright scored 75-yard touchdown run on his team’s first play from scrimmage. The Cougars totaled 16 points on their first three possessions. Brenham punted on each of its possessions.

Early in the second quarter, the Cubs gained back some ground when Matejowsky connected with Kenneth Whitley on a 4-yard TD pass. The 2-point conversion attempt failed and Brenham trailed 16-6.

The Cougars answered with two more touchdowns and corresponding 2-point conversions. Brenham was in the hole to the tune of 32-6 at halftime.

The mood in the locker room was different than one might expect, however.

“I just remember being very calm at halftime,” Matejowsky said. “I remember thinking, ‘Let’s just go out and do the best we can.’”

“It sounds maybe far-fetched, but we weren’t that disappointed at halftime as far as being down,” he said. “We knew we could play better and that was our goal coming out of the second half, just to play better.”

But Crosby piled it on to open the third quarter. The Cougars scored a TD to open the second half, but failed on the 2-point try. They then led 38-6.

This time, the Cubs responded. Brenham faced a fourth-and-2 situation at the Crosby 28-yard line. Matejowsky handed the ball to Vernon Rogers on a draw and the offensive line opened a huge hole.

Rogers raced in for the TD. Matejowsky connected with Whitley for the 2-point conversion and made the score 38-14. At that point, the Cubs were still just keeping the game respectable. The comeback wouldn’t truly begin until the end of the quarter.

Crosby once again answered Brenham’s score with a touchdown and a PAT — 45-14.

From that moment forward, the game belonged to the Cubs.

Sean Cooper took the ensuing kickoff back 80 yards for a touchdown to close the third period. Matejowsky added the 2-point run and Brenham trailed 45-22.

“At that point is when I really thought, ‘We have a chance here,’” Matejowsky said.

It was also the point when the Brenham defense stepped up in a big way. Led by linebacker Kris Krause, the Cubs forced punts or fumbles on every Crosby possession for the rest of the game.

Brenham running back Rodney Phillips scored on back-to-back touchdown runs to narrow the gap to 45-35. But the first scoring drive was when Matejowsky began his fourth-quarter heroics that would earn him the Houston Post’s Player of the Week.

On the Cougars’ next possession, they stalled at their own 40 yard line. After the punt, Brenham had the ball at its own 33 with 1:32 left to play. The Cubs needed just 13 seconds to score.

Barnhill and Cooper lined up on the outside. At the snap, they crossed each other, which effectively picked Cooper’s defender. The fleet-footed junior found himself sprinting down the middle of the field, wide open.

“I just remember thinking, ‘Don’t overthrow him. Just get it out there,’” Matejowsky said. “So I threw it pretty much as far as I could and he ran underneath, made the catch and ran for the touchdown.”

But the game wasn’t finished. Crosby had one last chance.

With 1:19 left to play on their own 19 yard line, Cougars quarterback Glen Yarborough tossed a short pass to Kendall Lewis. Lewis then lateraled the ball to Cartwright. Cartwright hurried down the Brenham sideline toward the end zone.

He never made it. Perhaps fittingly, it was the defense that saved the day for Brenham. Two Cub defenders crunched Cartwright and knocked the ball loose. Brenham recovered to seal the victory.

“I vividly remember looking up at the stands at the whole place was just going nuts,” Matejowsky recalled. “Everybody was screaming and hollering. Everybody on the sidelines was giving high-fives and hugging each other. It was a very exciting moment.”

“I was so proud of them for what they accomplished,” Elam said. “I was kind of calm, really. I was just walking around like a proud father. All these guys had just done a great thing in front of their hometown fans.”

Quarterback Chip Matejowsky attended Texas A&M and Houston. He is now an IT engineer living in Cary, North Carolina. He was inducted into the Brenham Hall of Honor in 2015. He and his father Charlie are currently the only father-son duo in the Hall.

Head coach Mark Elam left Brenham for North Mesquite in 1990. Twice he showed his players highlights of the Crosby comeback to get them ready for their big rivalry game with Mesquite High School. He finished his career at Rockwall High School, retiring from the school district and the athletic department in 2012. He still lives in Rockwall.

Thanks for the remembrance of what was a seminal experience for many of us but some of your reporting is inaccurate. The front line did not include Brad Lawhun, he was on defense. "Trey Holland" was not a member of that team. The correct name is Trey Holloway. And, most irritatingly to to me personally, you did not mention the 5th senior on the offensive line. That was me. David Rothermel, Right Tackle. So, thanks for "remembering" us.