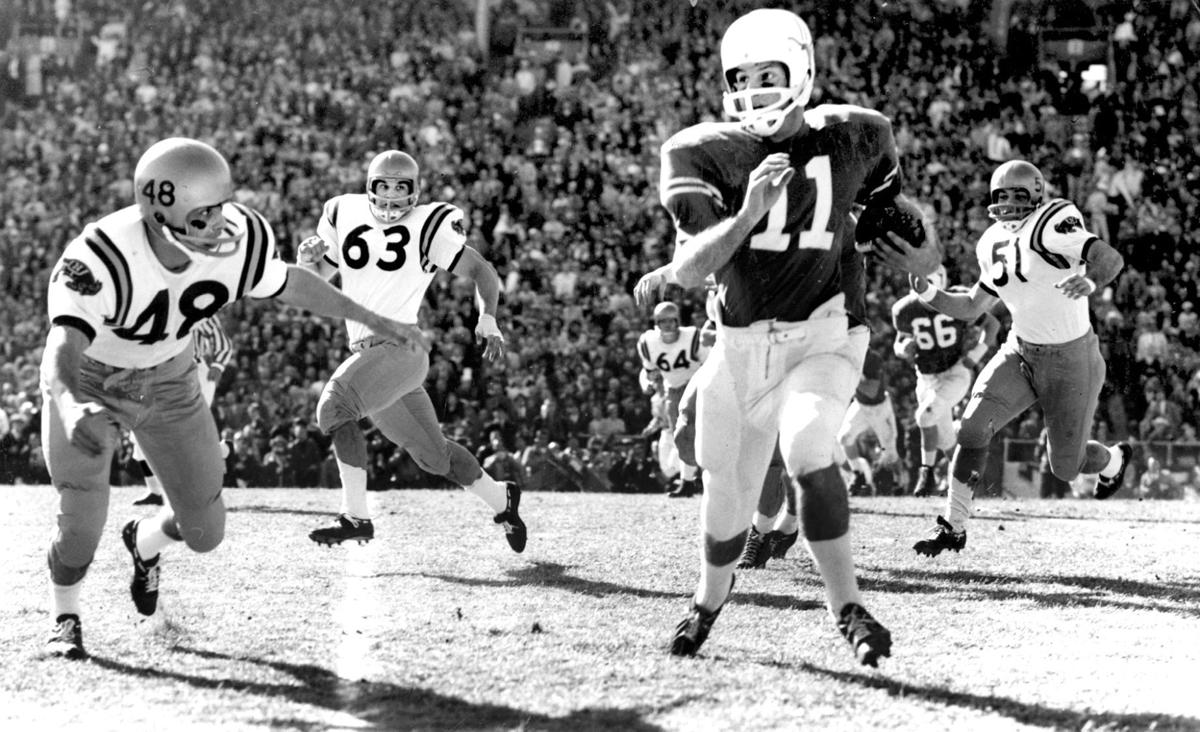 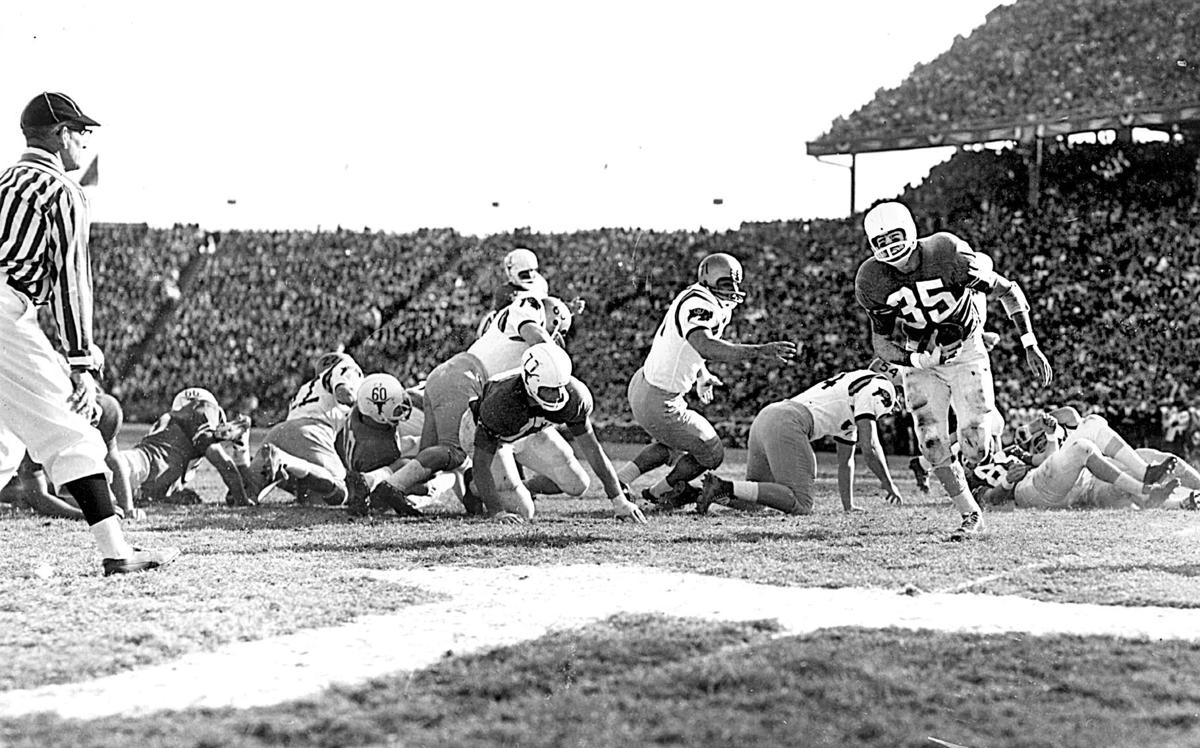 Harold Philipp (35) touchdown run lead the Longhorns to a devastating win over the Midshipmen.

The 1964 Cotton Bowl was a build-up for some and a pinnacle for others. It was the mountaintop for UT quarterback Duke Carlisle. It was just the beginning for his coach, Darrell Royal, and Navy QB Roger Staubach.

No single article can ever fully describe the layers and intertwined complexities of the 1963 college football season for the University of Texas and the Naval Academy. It can never completely express the evolving national landscape or the developing international entanglements of that year, especially the tragic 39 days that concluded the calendar.

It can’t be done in the space of a single newspaper page, but we’re going to do what we can. Strap in, here we go…

When Texas and Navy took the field on the first day of 1964, a small jungle country in Southeast Asia was becoming a household name in the United States. 16,000 advisors were in Vietnam in 1963 and by the end of 1964, the number would rise to 23,000.

The youngest President in American history had been assassinated just six weeks before the game — in Dallas, the home of the Cotton Bowl.

It was said in 1963, “… the Army belonged to Eisenhower, but the Navy belonged to Kennedy.” President Dwight D. Eisenhower was a graduate of West Point and was President from 1953-1961. John F. Kennedy served in the Navy and was a noted fan of the Naval Academy’s football team.

The annual Army-Navy game was scheduled for Nov. 30, just eight days after President Kennedy was killed. The teams initially balked at the decision to play the game, but the Kennedy family asked for the tradition continue uninterrupted. The event was postponed until Dec. 7 and turned out to be one for the ages with 102,000 fans in attendance at Municipal Stadium in Philadelphia.

Navy’s players were the “good” guys on Jan. 1, 1964. The Longhorns were the “bad” guys, the unfair recipients of the backlash after the assassination of the president.

There may not be another football weekend in Texas State Fair history that has rivaled or will rival the events of Oct. 11 and 12, 1963. Navy entered Friday, Oct. 11 ranked No. 4 in the nation. The Midshipmen played SMU in the Cotton Bowl and were upset 32-28 in a shocker.

The loss was difficult in more than one way. It was said that Staubach dislocated his shoulder at least twice during the game. The officiating was poor, to put it mildly. The refs called back the potential game-winning touchdown catch by Navy flanker Ed Orr in the closing seconds, amongst a host of other dubious decisions.

The officiating crew was suspended after a review of its questionable work.

The next day, on the same field, No. 2 Texas faced No. 1 Oklahoma in their annual rivalry game. The Longhorns whipped the Sooners 28-7 and took over the top spot in the AP poll.

But it wasn’t pretty. Staubach led the Midshipmen with flashy plays and unscripted heroics. Carlisle led the Longhorns with the wing-T option that simply bludgeoned opponents into submission. Texas didn’t throw the ball unless it had to: Carlisle attempted three passes against Oklahoma. He completed one.

It was popular at the time to say of the Longhorns: “They don’t beat you, they just bore you to death.”

As the media and the nation at large scorned Dallas and the state of Texas in the wake of the assassination, sportswriters mocked the idea of UT as the best football team in the country.

Navy’s regular season concluded with a thrilling win over Army. UT’s season ended with a narrow escape of Texas A&M in College Station. Staubach was awarded the Heisman Trophy and Texas was awarded the national championship.

But there was one more game to play, and Pittsburgh sportswriter Myron Cope led the charge in believing Navy was far superior to Texas. Cope is probably remembered today more for creating the Terrible Towel used by Pittsburgh Steelers fans than his comments on the Texas-Navy game, but he had some genuine doozies at the end of 1963:

“Tune in your television to the Cotton Bowl and you’ll laugh yourself silly.”

“The only way Texas can beat Navy is if someone slips a Mickey into Roger’s orange juice.”

“Texas is a team populated with slow guys with skinny legs and big butts.”

And the crown jewel:

“Texas is the biggest fraud ever perpetrated on the football public.”

Texas and Navy had been No. 1 and No. 2 for two weeks before President Kennedy’s trip to Dallas. Talk was in the air of a potential matchup in the season finale.

As the President’s motorcade wove through Dallas, it was on its way to a luncheon with local bigwigs. At the event, Kennedy would have delivered this joke in his prepared remarks:

“I like the idea of the Navy-Texas game, personally, and I’d like to do what I can to help, except that I know how you folks feel about federal intervention.”

Had the day proceeded as planned, President Kennedy, Vice President Johnson and Texas Governor John Connally would have left Dallas for Austin and attended a UT practice. Kennedy had been practicing his “Hook ‘Em, Horns” gesture for the occasion.

Coach Royal and several players had signed a football to give to the President upon his arrival.

The game itself might have been a letdown for some, but it was surely an event of exuberant vindication for Texas fans. The Longhorns dominated the contest from start to finish. Navy and its Heisman Trophy winning QB did not manage a single point for first 48 of 60 minutes.

Staubach led one scoring drive and the 2-point conversion pass failed. He was harassed continuously by UT’s defense, as were Navy’s running backs. Pat Donnelly, who scored three TDs versus Army, managed just 12 rushing yards. Navy finished with -14 rushing yards as a team.

But despite Navy’s struggles, Staubach set a Cotton Bowl record with 228 passing yards, though mostly in the second half against second-string defenders. Ironically, it was UT’s quarterback who wowed fans with his downfield passes.

Carlisle had not completed a touchdown pass all season before the Cotton Bowl. On his first two attempts that day, he launched 58-yard and 63-yard strikes to Phil Harris. The plays were identical and the outcomes were identical. Five minutes into the second quarter, Texas led 14-0.

By halftime, the Longhorns led 21-0 and soon after, Carlisle called it a career. With the game firmly in hand, the Texas QB retired to the bench and the Longhorns rode out the rest of the win with the backups.

Texas finished the 1963 season undefeated and the undisputed champions of college football.

“ESPN’s Outside The Lines: Game in the Shadows,” Robert Weintraub

“A Microcosm of the Cotton Bowl: Texas Makes Long Advance, Navy Is Held to Short One,” Allison Danzig, The New York Times, Jan. 2, 1964