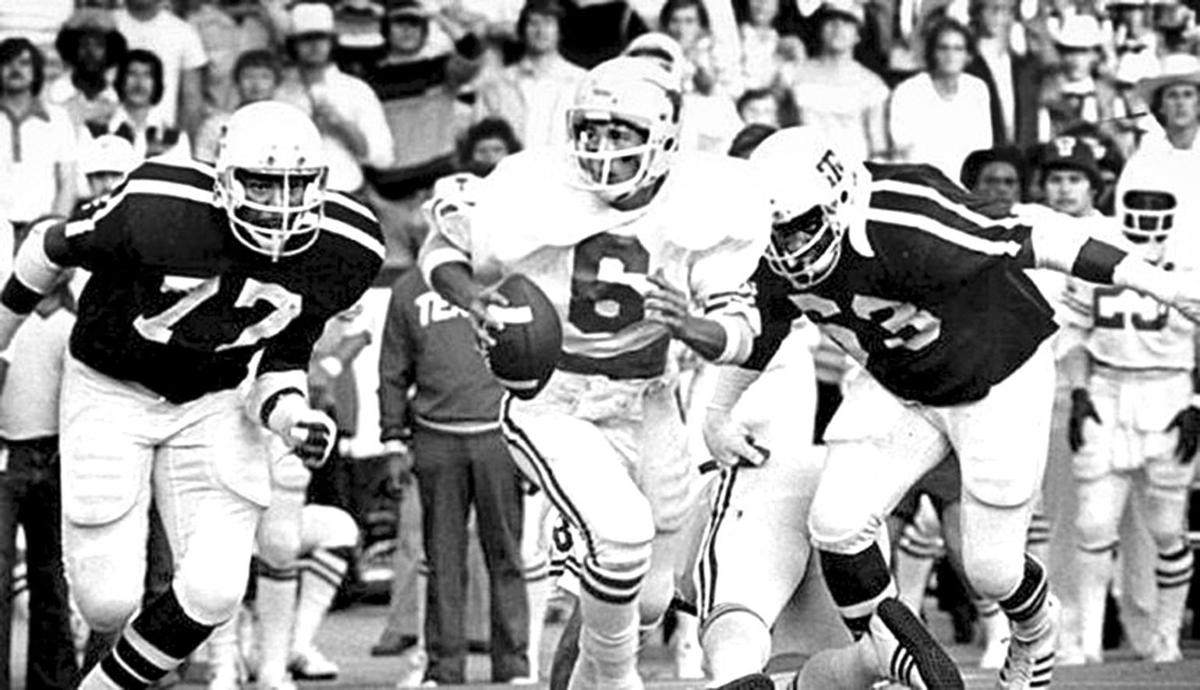 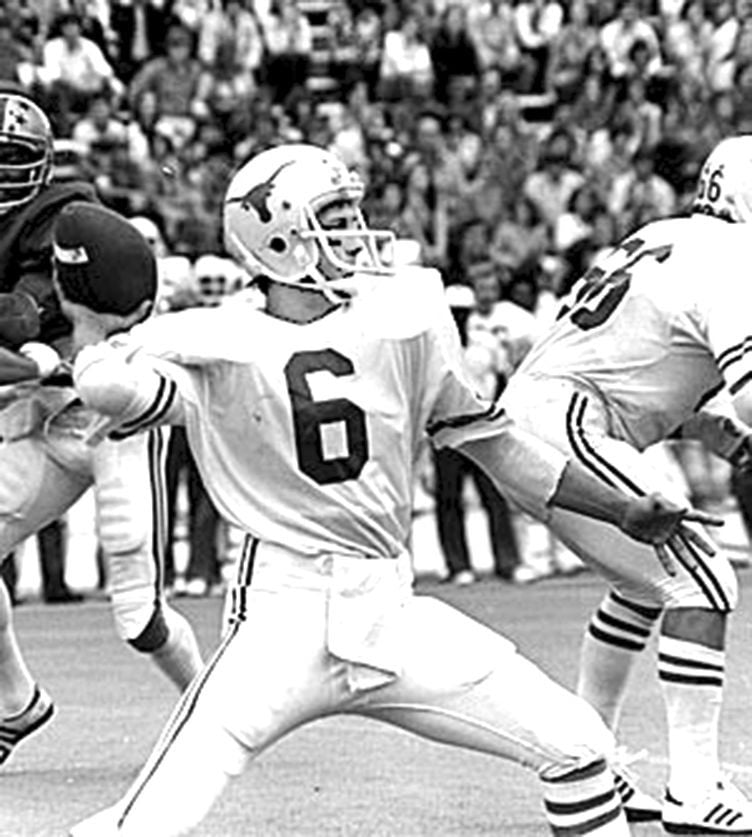 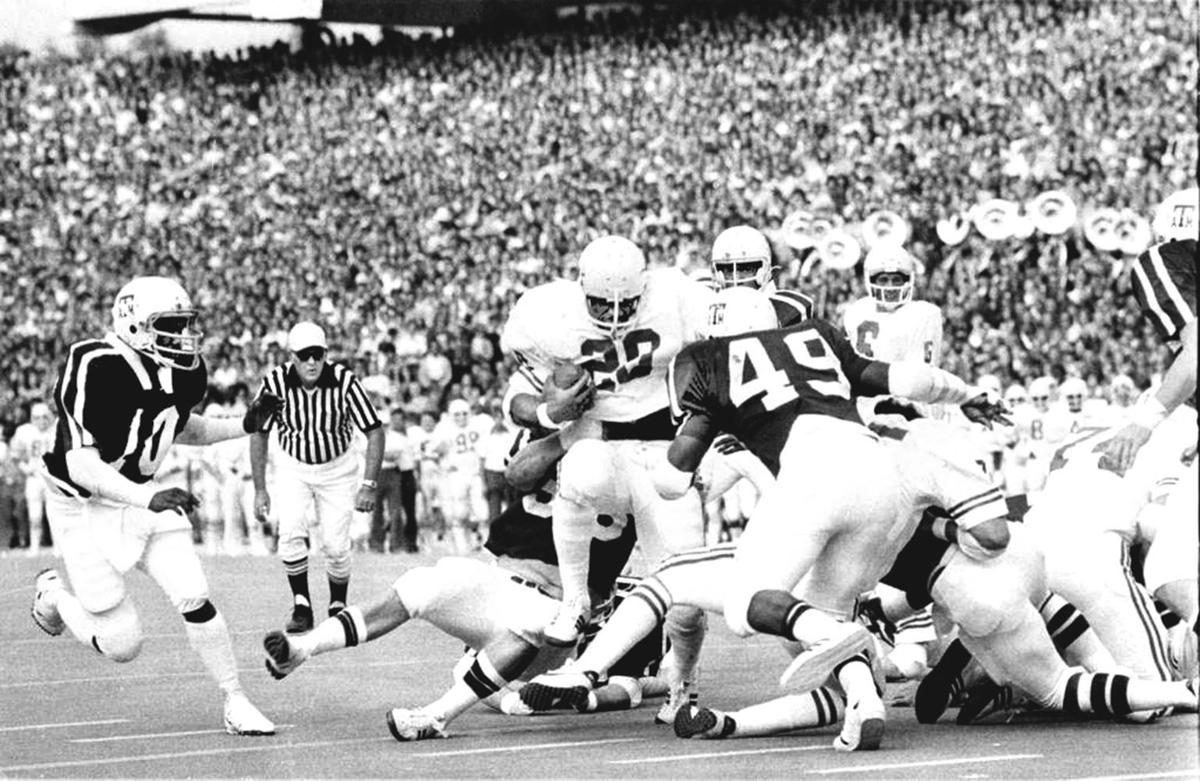 He had been stung in the back of the head by three wasps and was having a severe allergic reaction. His good friend and former Texas wide receiver Pat Kelly dialed 911 on his cell phone. He screamed for help.

Jana Kay was jogging on the Town Lake trail nearby when she saw Kelly’s frantic reaction. She had recently been certified in CPR and raced over to help. She worked on McEachern until the paramedics arrived and rushed him to the hospital.

McEachern narrowly survived. Four years later, on the 30th anniversary of the year he became a household name for UT fans, he was inducted into the Longhorn Hall of Honor. He was an unlikely hero for the University of Texas and it all began Oct. 8, 1977 in the Red River Rivalry.

When Texas backup quarterback John Aune tore ligaments in his knee on UT’s fourth series of the Red River Shootout, as it was called at the time, the TV announcers scrambled to figure out who would be next to lead the Longhorns.

Starter Mark McBath broke his ankle on the third series and Aune lasted just nine plays before he went down. The trio in the booth had no quarterbacks left on their rosters.

The play-by-play man quickly threw the question to sports director Steve Ross of KVUE, channel 24 in Austin. “Steve, who would that bring in? We don’t even have him on the depth chart.”

Ross speculated about a pair of freshmen, but he really had no idea. Everyone was surprised when No. 6 trotted onto the field.

Redshirt junior Randy McEachern entered the game in a situation that was becoming more desperate by the minute, and it was still only the first quarter. He had been an afterthought for two seasons and had only handed the ball off during mop-up time of three games in 1977.

The announcers knew so little about him that Ross actually called him a freshman on the broadcast before finding the correct information.

The story goes that it was Earl Campbell who broke away from the huddle to give McEachern a vote of confidence as he ran onto the field in Dallas. Campbell did take a step or two away from the team and clapped twice, but it was offensive lineman George James who jogged out to meet McEachern.

Campbell did give the wide-eyed quarterback a pep talk when he reached the huddle, in his own way.

Though they stood the same height, 5-foot-11, Campbell outweighed McEatchern by 60 pounds. But size didn’t matter. They would become a good pair.

Both teams were unbeaten that year and riding high coming into the showdown. No. 2 Oklahoma had survived a massive game in Columbus two weeks earlier when Barry Switzer’s Sooners upset Woody Hayes’ Buckeyes 29-28 on a last-second field goal.

OU had been No. 5 at the time and OSU had been No. 4. The Sooners moved up to No. 3 after the win and then took over No. 1 after beating Kansas the next week.

Texas had crushed Boston College, Virginia and Rice to open the season and had climbed steadily in the ranks until it reached No. 5 at the time of the rivalry matchup.

Darrell Royal was not at the helm of the Longhorns for the first time in 20 years. He retired as the coach and became the full-time athletic director after the 1976 season.

Royal’s offensive coordinator Fred Akers ascended to head coach and was about to get his first real test as chief decision maker. Texas had cruised through its first three games, but this one would be different — in many ways.

Texas trailed 3-0 when McEachern took the field and it had been a rough first quarter for both teams. UT tried a halfback pass with Campbell on its second play from scrimmage and OU linebacker Reggie Mathis drilled Campbell in the back as he released the ball. It fluttered, wounded, into the hands of David Hudgens for an OU interception.

The Sooners then fumbled the ball back to the Longhorns on their second play from scrimmage. Texas defensive lineman Steve McMichael, who would go on to have a Hall of Fame career with the legendary 1985 Chicago Bears, knocked the ball loose from OU backup running back Kenny King.

Fans in the Cotton Bowl that day were deprived of their only real opportunity to see Billy Sims and Earl Campbell square off against each other. Sims was a redshirt sophomore in 1977 and Campbell was a senior, but Sims was still recovering from ankle injuries that slowed his freshman season and sidelined him for all of 1976. He was still ailing in ’77 and did not play in the annual rivalry game.

Campbell, of course, did play and scored the game’s only touchdown. Late in the first half, the score was tied 3-3. McEachern had led a 6-play, 60-yard drive early in the second quarter to get the Longhorns a field goal and now he was about to do it again.

He led a 6-play, 80-yard drive that ended with Campbell rumbling into the end zone from 24 yards out. The lone TD gave Texas a 10-3 lead at halftime.

Oklahoma notched a field goal in the third quarter and Texas countered with one in the fourth, and that was all she wrote. Texas upset OU 16-3 and set the stage for an unforgettable season.

“I worked hard for that moment,” McEachern said in 2007. “I prepared each week and was prepared mentally as I stood on the sideline.”

It was the last time he stood on the sideline — when healthy — that season. He became the permanent starter after the OU game and the Longhorns went on a tear. They beat No. 8 Arkansas in Fayettville the next week and then SMU in the Cotton Bowl a week later.

They blanked No. 14 Texas Tech, then ripped through Houston, Baylor and TCU. They demolished No. 12 Texas A&M 57-28 at Kyle Field to close the regular season.

Those wins closed out a perfect 11-0 schedule and set up a third date at the Cotton Bowl, this one for the national championship. Texas faced 11-1 Notre Dame and its junior quarterback Joe Montana.

The Irish dismantled the Longhorns 38-10 and claimed their 10th title in school history.

Campbell won the Heisman Trophy in 1977 and moved on to the Houston Oilers. McEachern returned to UT for his redshirt senior season and helped lead the Longhorns to a 9-3 record in 1978.

It was not a bad career for someone who never expected to go to UT. McEachern was barely noticed as a recruit coming out of Dobie High School in Pasadena. He wanted to follow in his father Bobby’s footsteps and play quarterback at TCU, but the Frogs wanted him to go to junior college first.

Akers convinced him to come to Texas. He was buried on the depth chart by 1977 and after knee surgery that spring, Akers, who was now the head coach, switched him to defense.

But McEachern protested, saying he was a good as any of the other quarterbacks. He just needed a chance. Akers gave in and on Oct. 8, McEachern got the chance.

After his career at Texas, he founded a small financial company that he built into a successful business. He married a former UT cheerleader, Jenna, and they had a daughter named Bailey and a son named Hays. Hays was a walk-on quarterback at Oklahoma in 2007 when his father was inducted into the Longhorn Hall of Honor.

McEachern still lives in Austin and was the co-president of the Austin High School booster club at the time of his near-death experience.