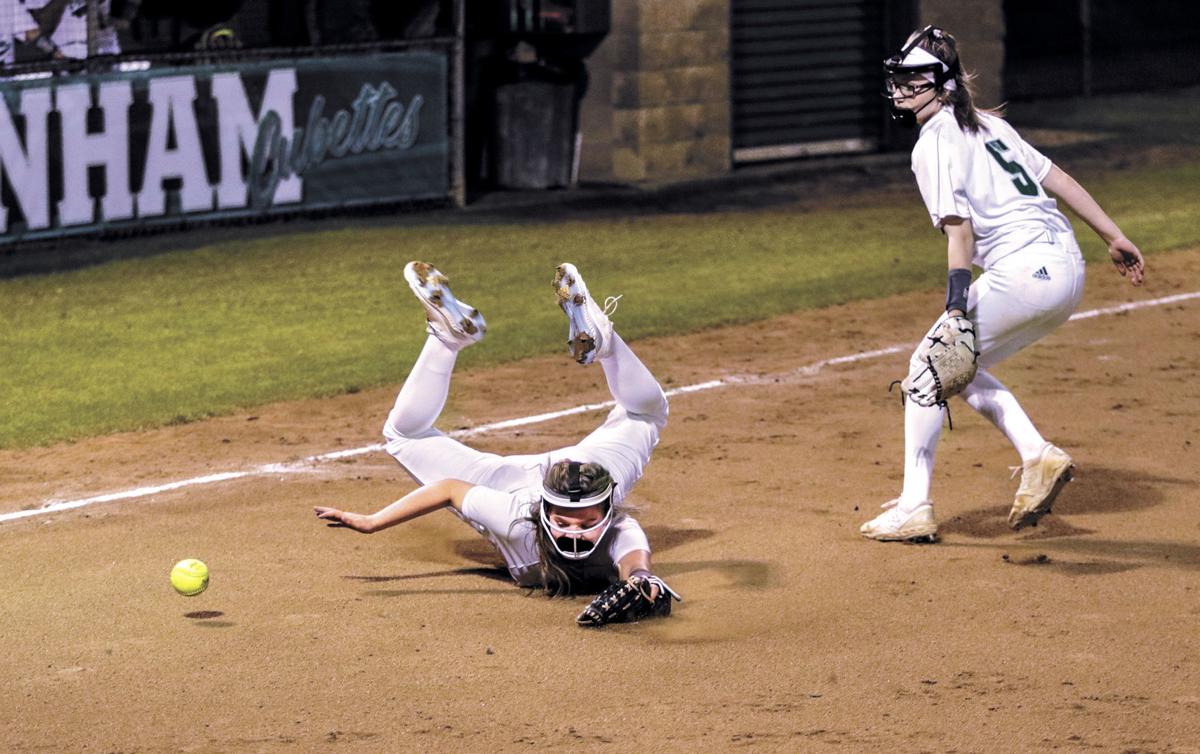 The ball squirts away from Brenham’s Riley Meyer, diving to catch a short pop up as pitcher Presley Parker looks on during a non-district game against Klein Cain here Monday night at Alumni Field. The Cubettes commited seven errors in their 11-10 loss to the Hurricanes. 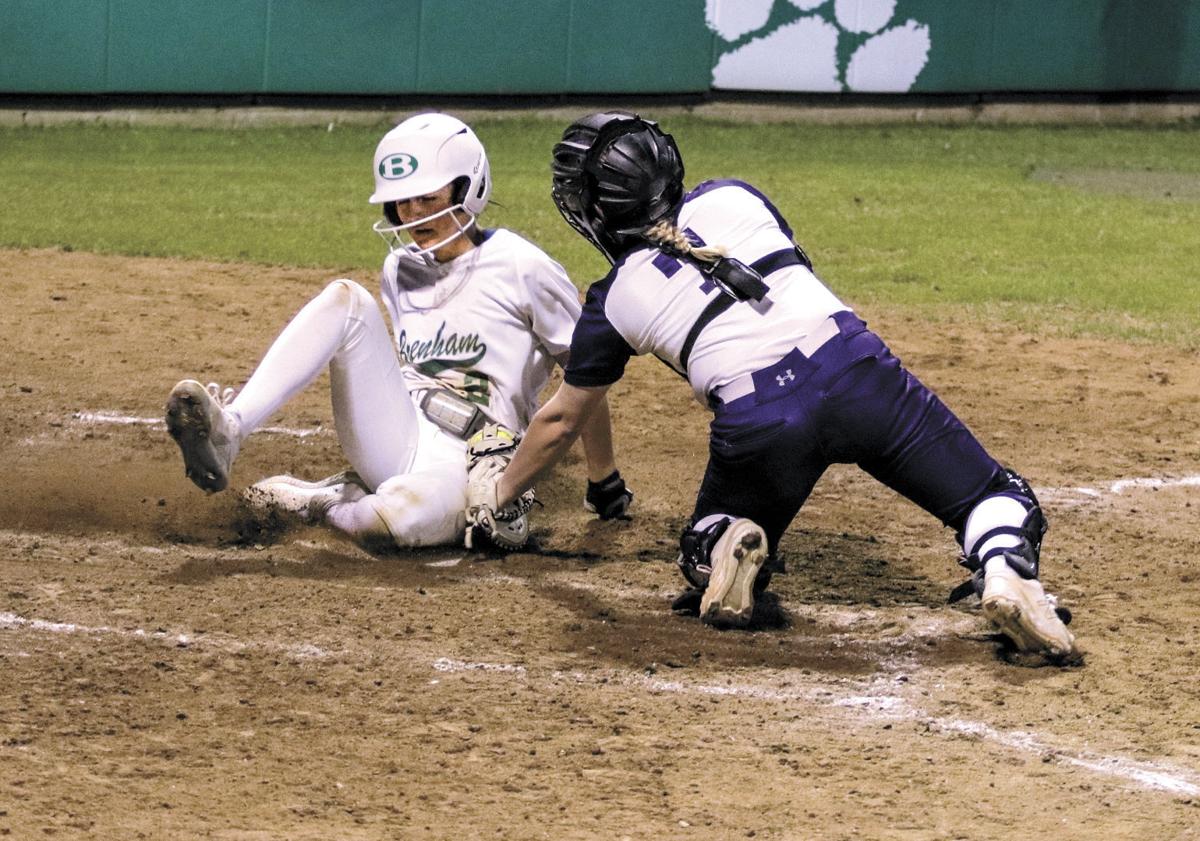 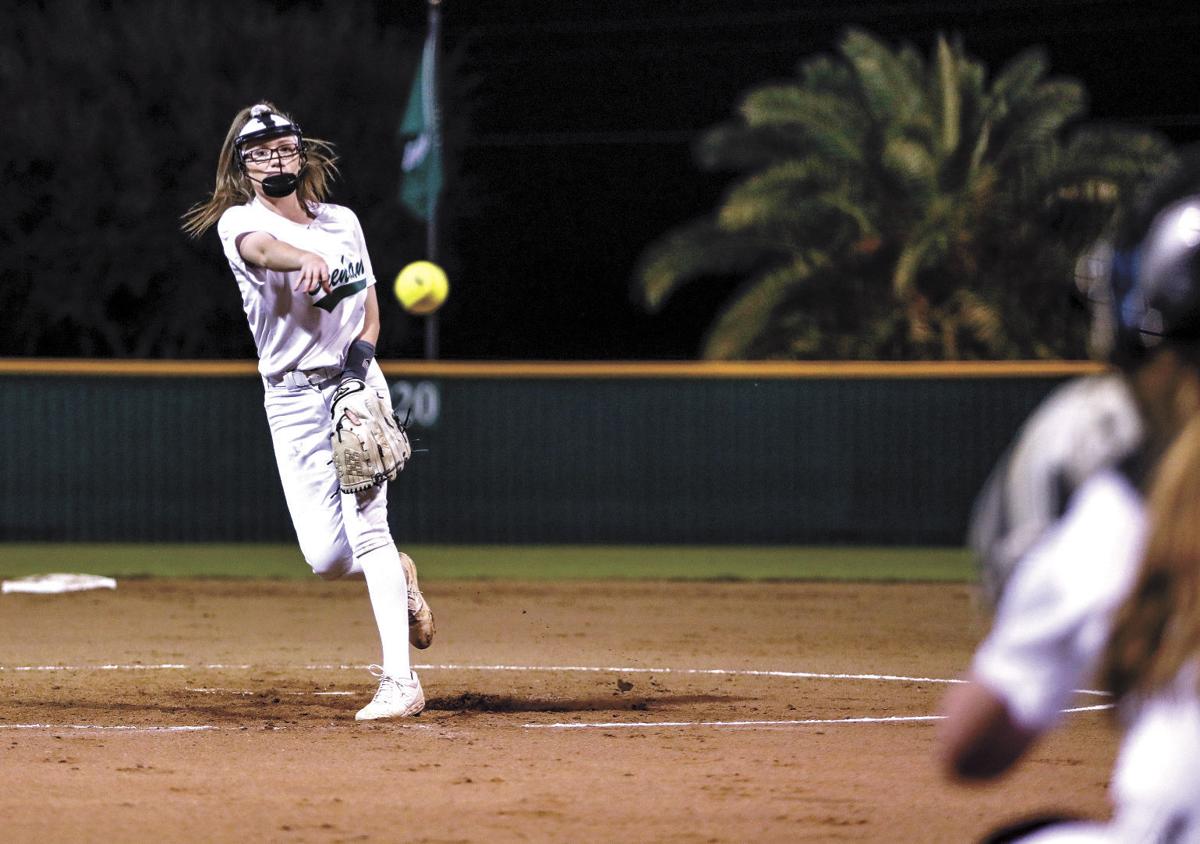 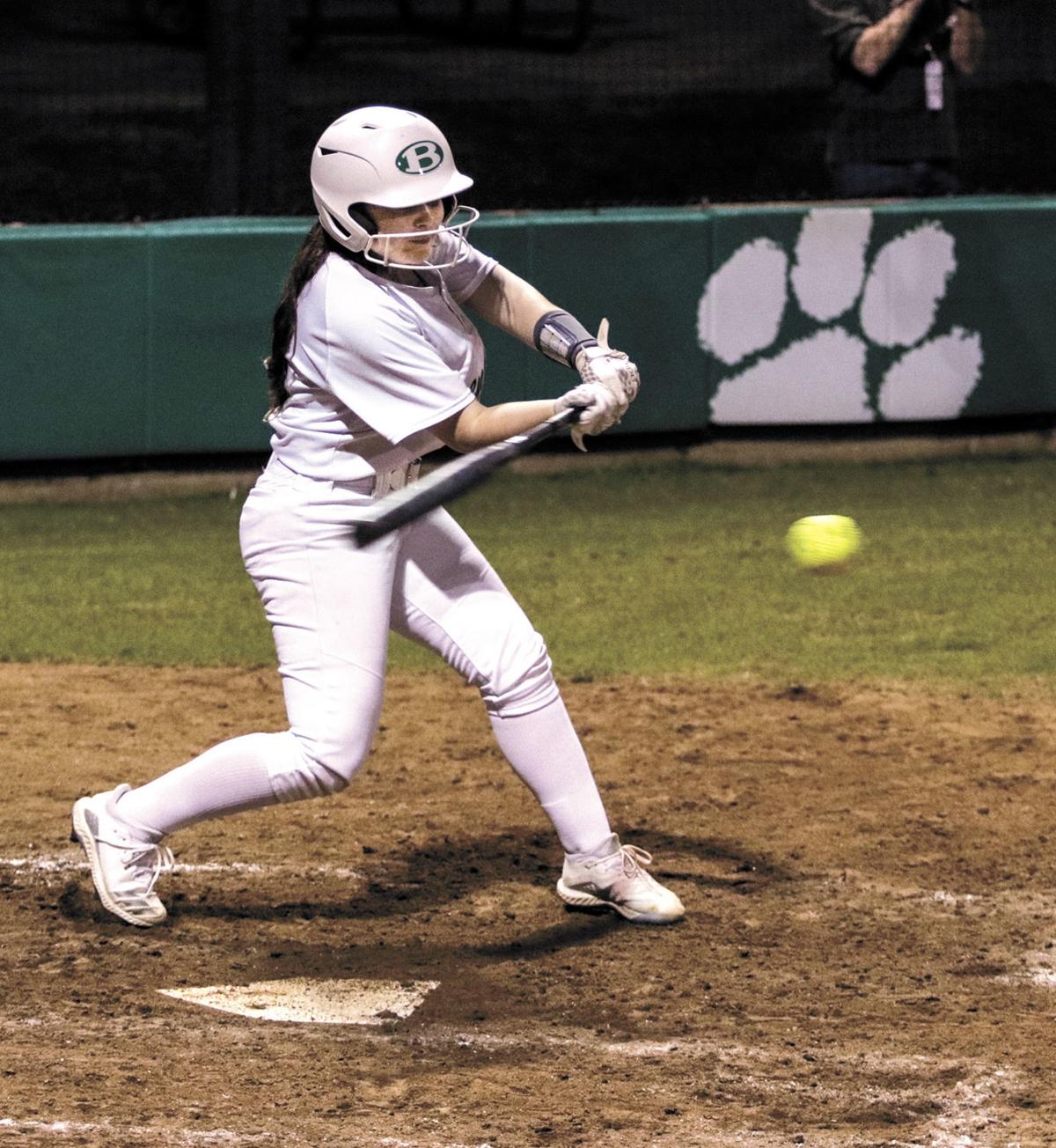 Brenham's Chloe Arens takes a swing on a pitch during a non-district game against Klein Cain here Monday night at Alumni Field. 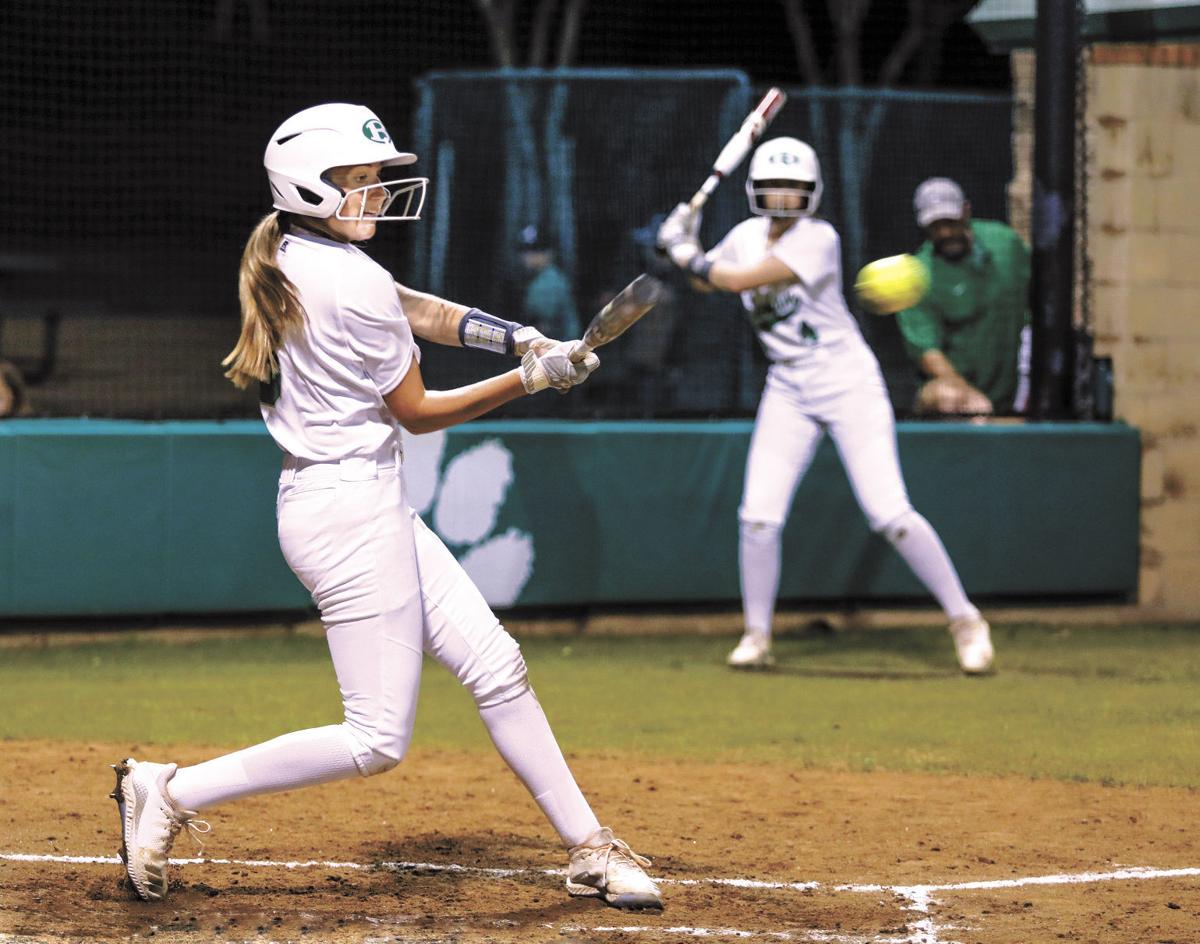 Brenham's Kameron Stolz connects for a base hit during a non-district game against Klein Cain here Monday night at Alumni Field. 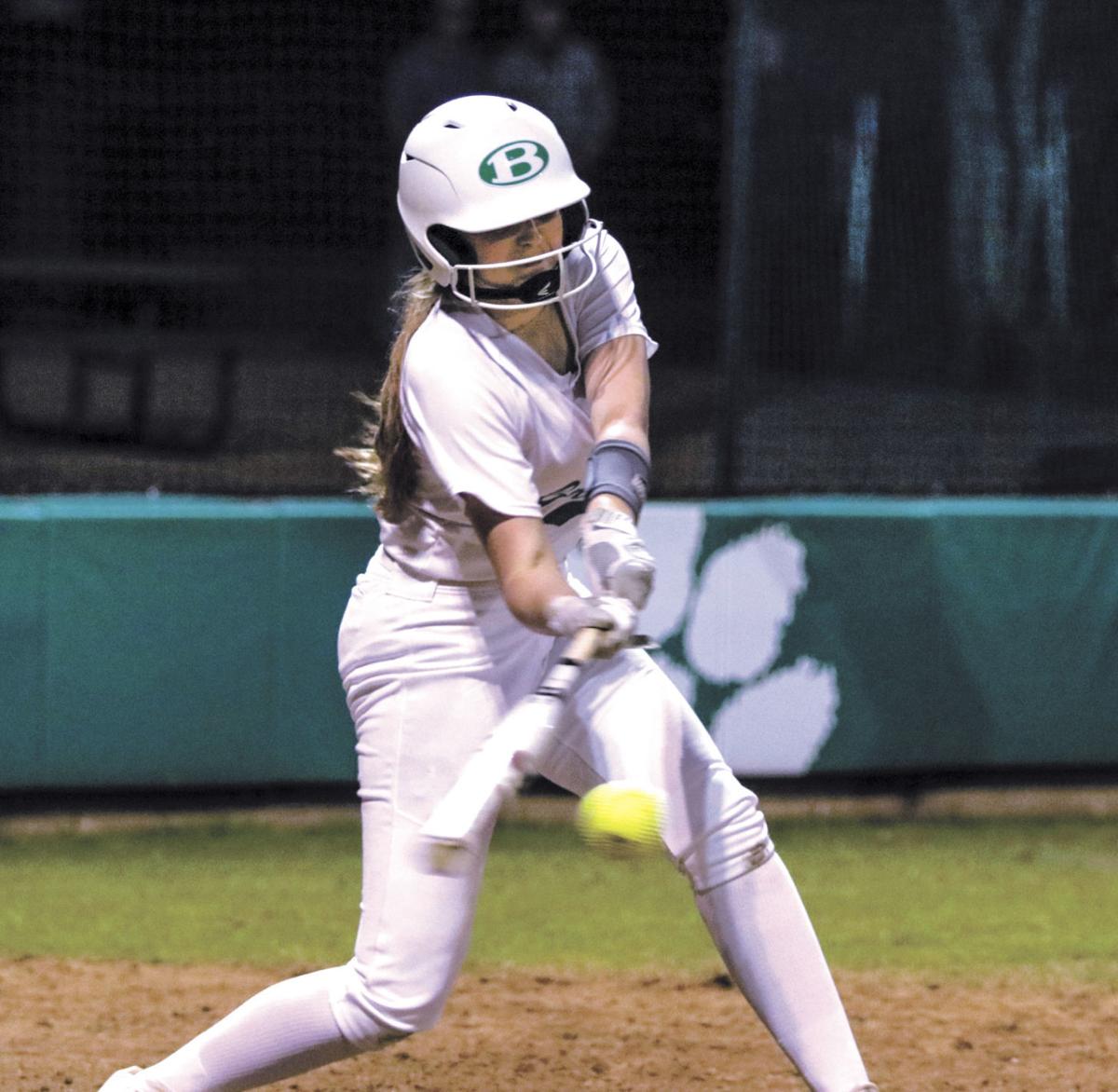 Brenham’s Jenna Hardy connects for a base hit during a non-district game against Klein Cain during a game Feb. 17 here at Alumni Field. 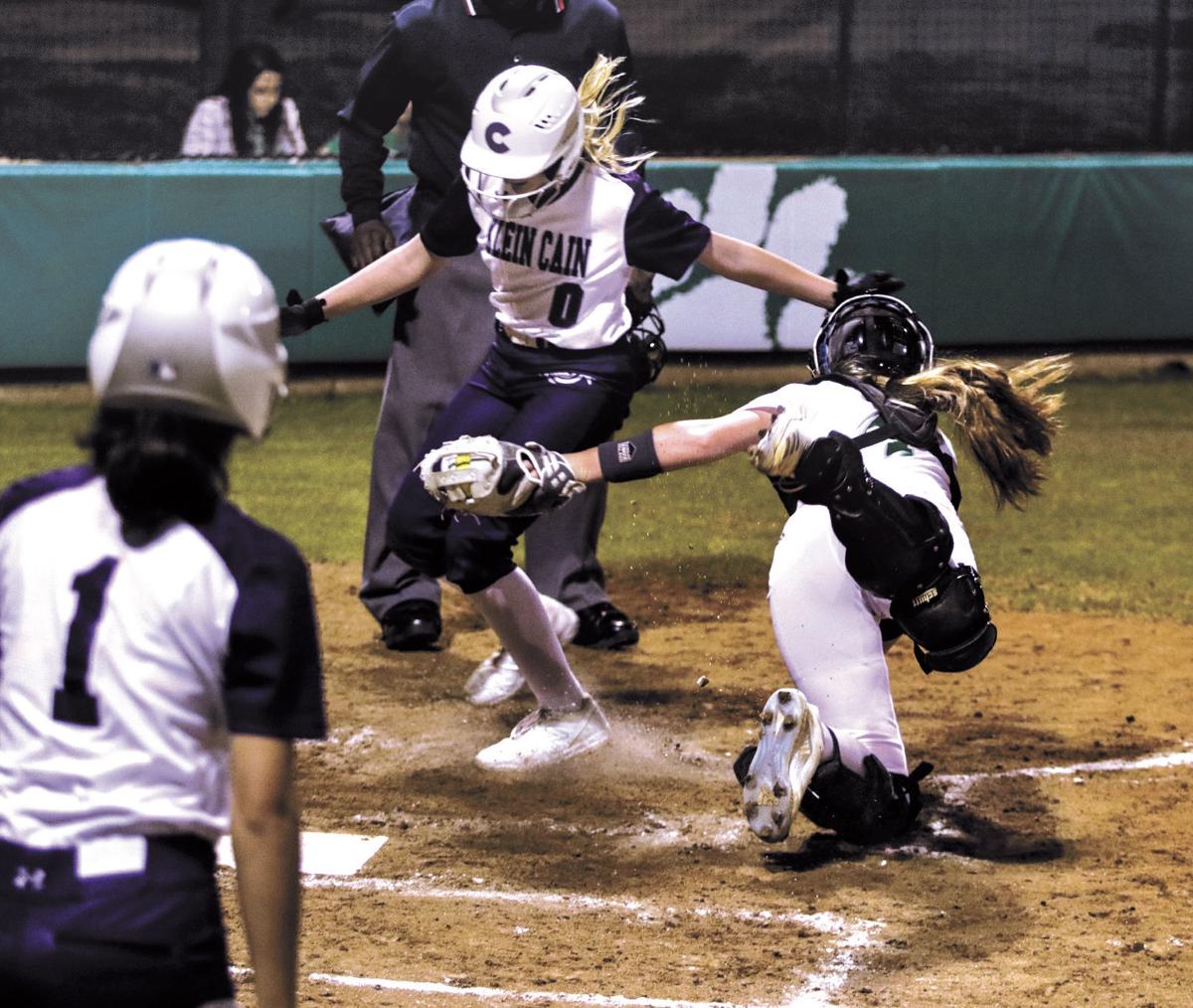 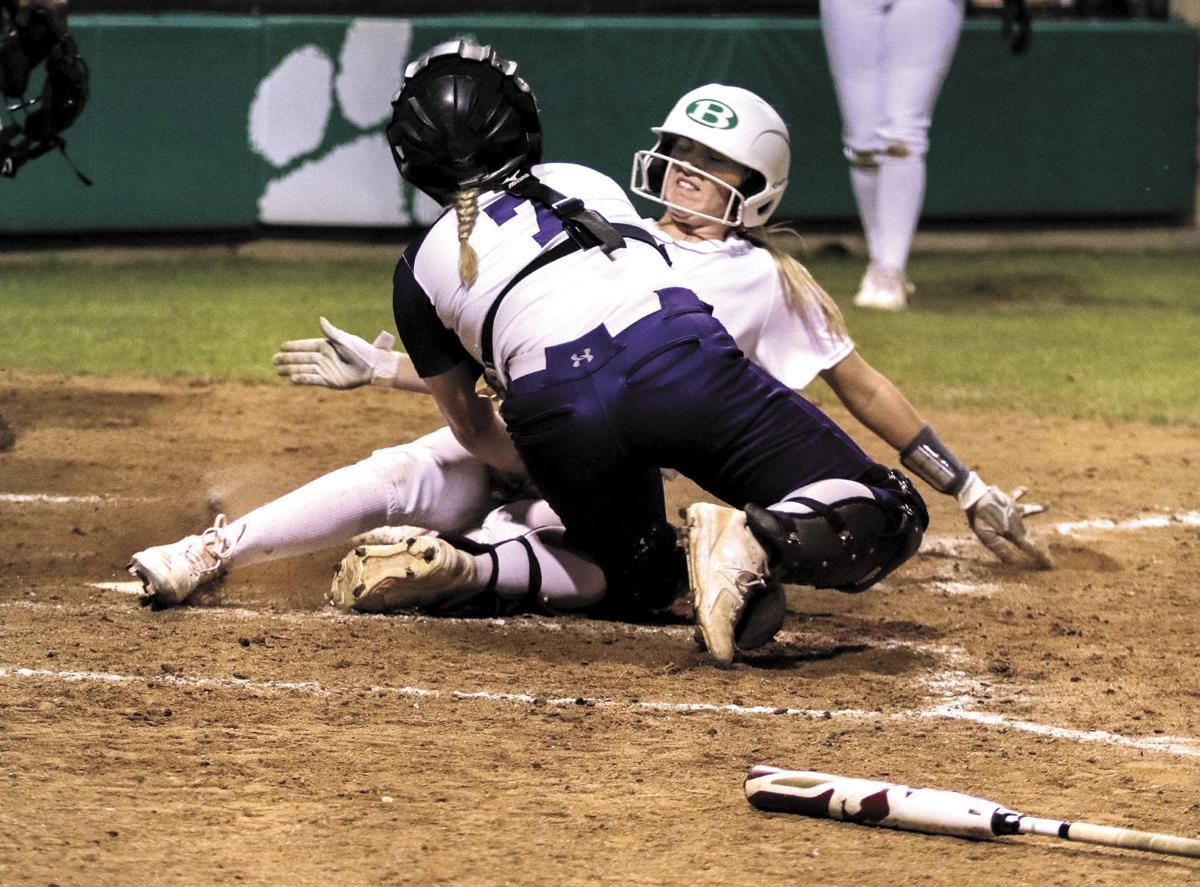 The ball squirts away from Brenham’s Riley Meyer, diving to catch a short pop up as pitcher Presley Parker looks on during a non-district game against Klein Cain here Monday night at Alumni Field. The Cubettes commited seven errors in their 11-10 loss to the Hurricanes.

Brenham's Chloe Arens takes a swing on a pitch during a non-district game against Klein Cain here Monday night at Alumni Field.

Brenham's Kameron Stolz connects for a base hit during a non-district game against Klein Cain here Monday night at Alumni Field.

Brenham’s Jenna Hardy connects for a base hit during a non-district game against Klein Cain during a game Feb. 17 here at Alumni Field.

Brenham hit the ball all over the field Monday night.

Unfortunately, that was also the manner in which they threw it.

The Cubettes smacked 15 hits and were on the verge of completing a come-from-behind victory over visiting Klein Cain, but a shaky defensive night eventually caught up to the hosts as the Hurricanes rallied in the top of the seventh and held on for an 11-10 non-district victory in Brenham’s season opener here at Alumni Field.

Brenham (0-1) committed seven fielding errors, including four in the seventh that helped Klein Cain erase a 9-6 deficit with a five-run outburst.

“I think if we take care of a few things defensively — I don’t expect us at this point right now to be perfect, but if we limit the amount of balls we throw around, we’re on the other side of this ballgame,” Brenham head coach Katie Roberts said.

Five runs of their own in the sixth had the Cubettes poised for the victory over their Class 6A counterparts, but the Hurricanes (1-1) came out swinging in their final at-bat before using an error-filled, two-out rally to take the lead for good.

After Emma Gray led off the frame with a double, she advanced to third on a ground out before scoring on Mak Coppin’s single. Alize Freeman then reached on an infield single that squirted away from Cubettes third baseman Riley Meyer. Grace Coleman followed with a deep fly ball that plated Coppin, but Brenham got a break when Freeman was forced to try to advance to third base as Coppin tried to stretch her base hit into a double.

Brenham threw Freeman out at third for the second out of the inning and still led 9-8 with two outs.

From there, however, Morgan Atkins’ would-be single was mishandled in right field, and two throwing errors followed as Coleman scored before Atkins followed her to the plate for a 10-8 advantage.

Emily Tran then sent a line drive into right that was again misplayed, and Tran was able to round the bases for the eventual game-winning run as the ball traveled to the outfield wall.

“When we make an error, we dwell on the error and we don’t look forward to the next play or pick our own selves up before somebody else does,” Cubettes junior Kramer Eschete said. “We just need to have a better mental defensive game.”

Brenham opened up its half of the seventh with back-to-back strikeouts before going into rally mode.

Freshman Kameron Stolz picked up her third hit of the game with a single, and senior catcher Jenna Hardy just missed tying the game with a deep fly ball to left that bounced off the top of the fence for an RBI double.

“I really thought it might go,” Hard said of her double. “But that’s all I can do in that situation: Hit the ball really hard, drive in the run and count on my teammates to drive me in.”

But the Cubettes were unable to pick Hardy up, as Brenham’s rally would be cut short when Kenley Mikolajchak popped out to end it.

“We battled; we fought hard. Our bats were working really hard to make up for some of the defensive errors that we had,” Hardy said. “When it came down to it, we just made too many defensive errors to keep ourselves in that game.”

Brenham freshman Presley Parker absorbed the loss in her first varsity start after showing promise in what also resulted in her first complete game. She racked up seven strikeouts and walked just three. Parker did allow 15 hits, but just five of the 11 runs she surrendered were earned.

“Presley did a great job tonight, but it comes down to our defense backing her up because she can’t do all of the work,” Hardy added. “But I thought she pitched a great game.”

Klein Cain took a 1-0 edge in the first inning when an errant throw allowed Coleman to score from second base with one out.

Brenham would take its first lead of the night in the third after Eschete singled and scored on a missed catch error that allowed Stolz to advance to third base. Stolz then scored on Hardy’s suicide squeeze bunt for a 2-1 advantage.

The Hurricanes would surge ahead with a four-run fourth inning, but Brenham got singles from Chloe Arens and Leah Blum to open the home half of the inning before Eschete’s RBI single was mishandled in center field, putting Eschete on third as the hosts pulled within 5-4.

After Klein Cain pushed its lead to 6-4 in the fifth, Brenham erupted for five runs in the sixth.

Eschete drove in her third run of the evening with a double that scored Meyer, and Stolz drove in Eschete with a single. Hardy plated Stolz with a line-drive single before moving to third on Mikolajchak’s base hit. Karleigh Flisowski then drew a walk to load the bases, and Kallista Garcia drove in courtesy runner Cynthia Cienega with a single before Arens’ RBI ground out scored Mikolajchak for a 9-6 Cubettes cushion.

All nine hitters in the Brenham lineup had at least one hit, and five Cubettes finished with one RBI or more.

“I think we had 15 hits … anytime you’re having double-digit hits in a game: One, I think you should win it; But number two, you’re excited,” Roberts said. “I think that was a great game for our team. We competed a lot; we fought back a lot in a lot of different situations.

“Even with two outs in the bottom of the seventh, we were finding a way to just not give up and that’s awesome to see from a coach’s perspective.”

“The pitching we saw tonight I think will be comparable to a lot of the teams we face in our district,” Roberts said. “So if we can continue to swing the bats like that, we’re going to be successful when we get to that portion of the season.”

Brenham continues its season with the start of the three-day Brenham Leadoff Classic at Alumni Field and Hohlt Park. The Cubettes open the tournament Thursday with an 11 a.m. matchup against Lexington before taking on Clear Creek at 1p.m., St. Agnes at 4 p.m. and finishing with Salado at 6 p.m., all at Alumni Field.