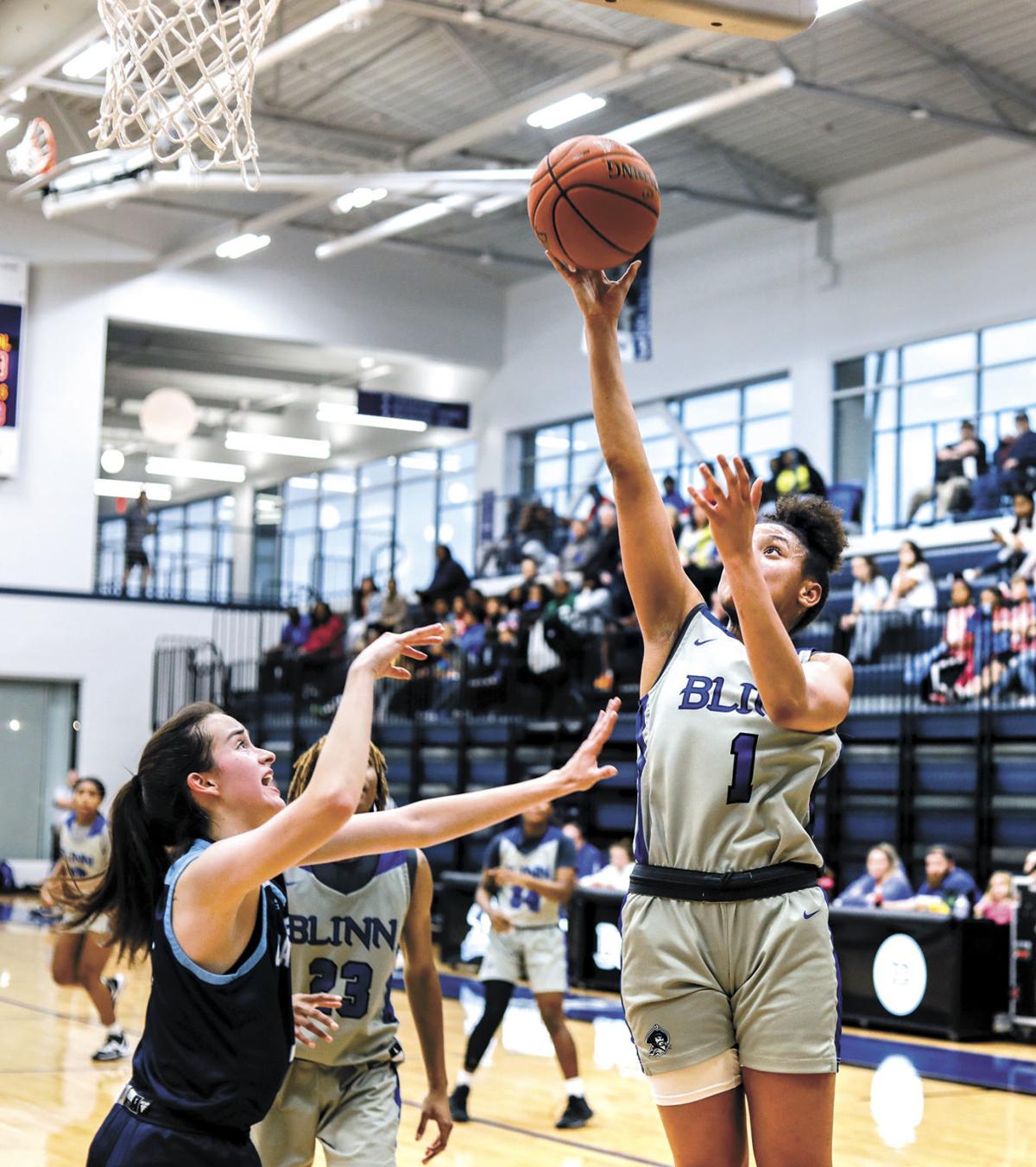 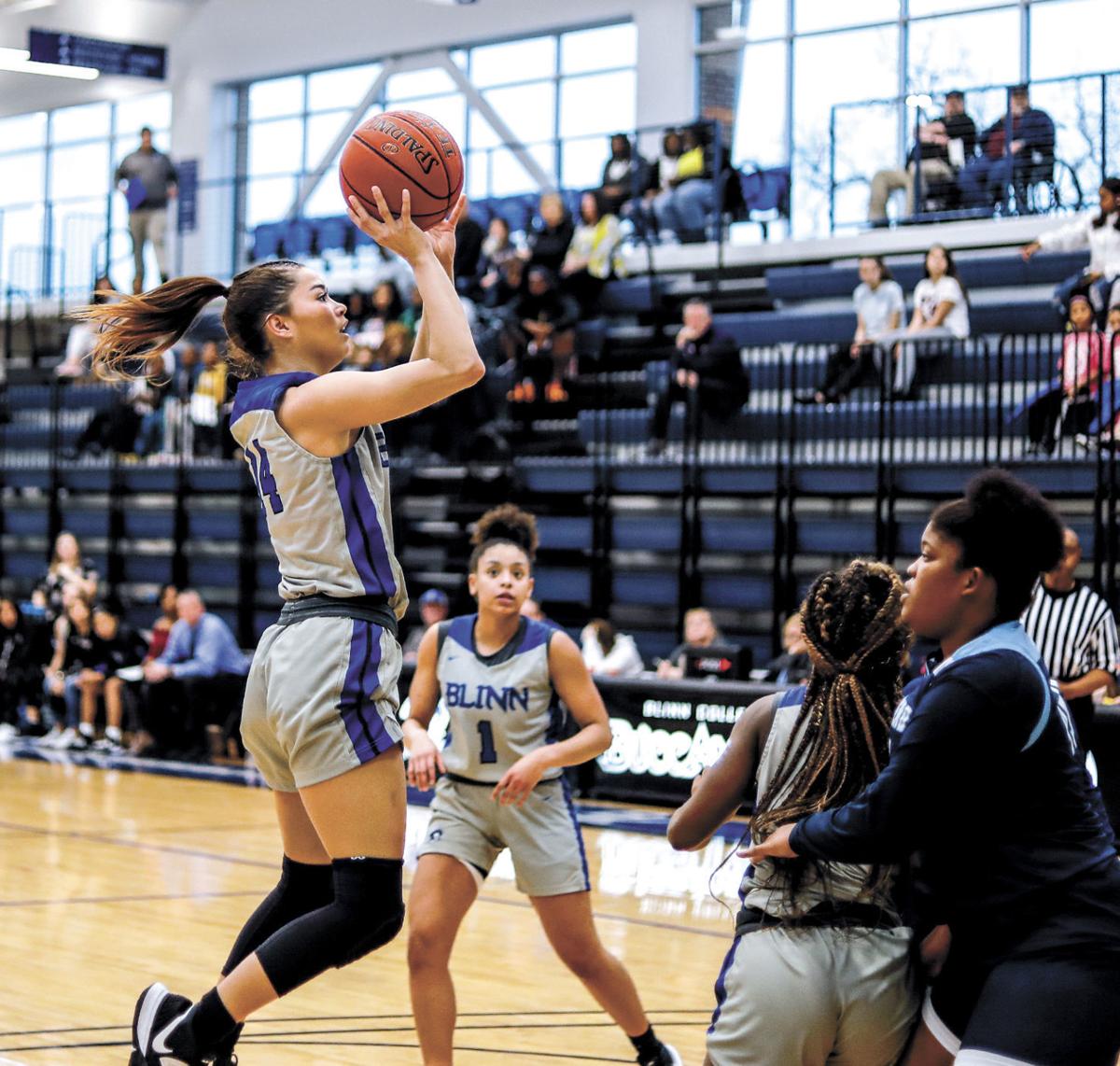 Blinn College’s Mia Cherry pulls up for a jumper during a Region XIV basketball game against Coastal Bend here Feb. 12 at the Kruse Center. 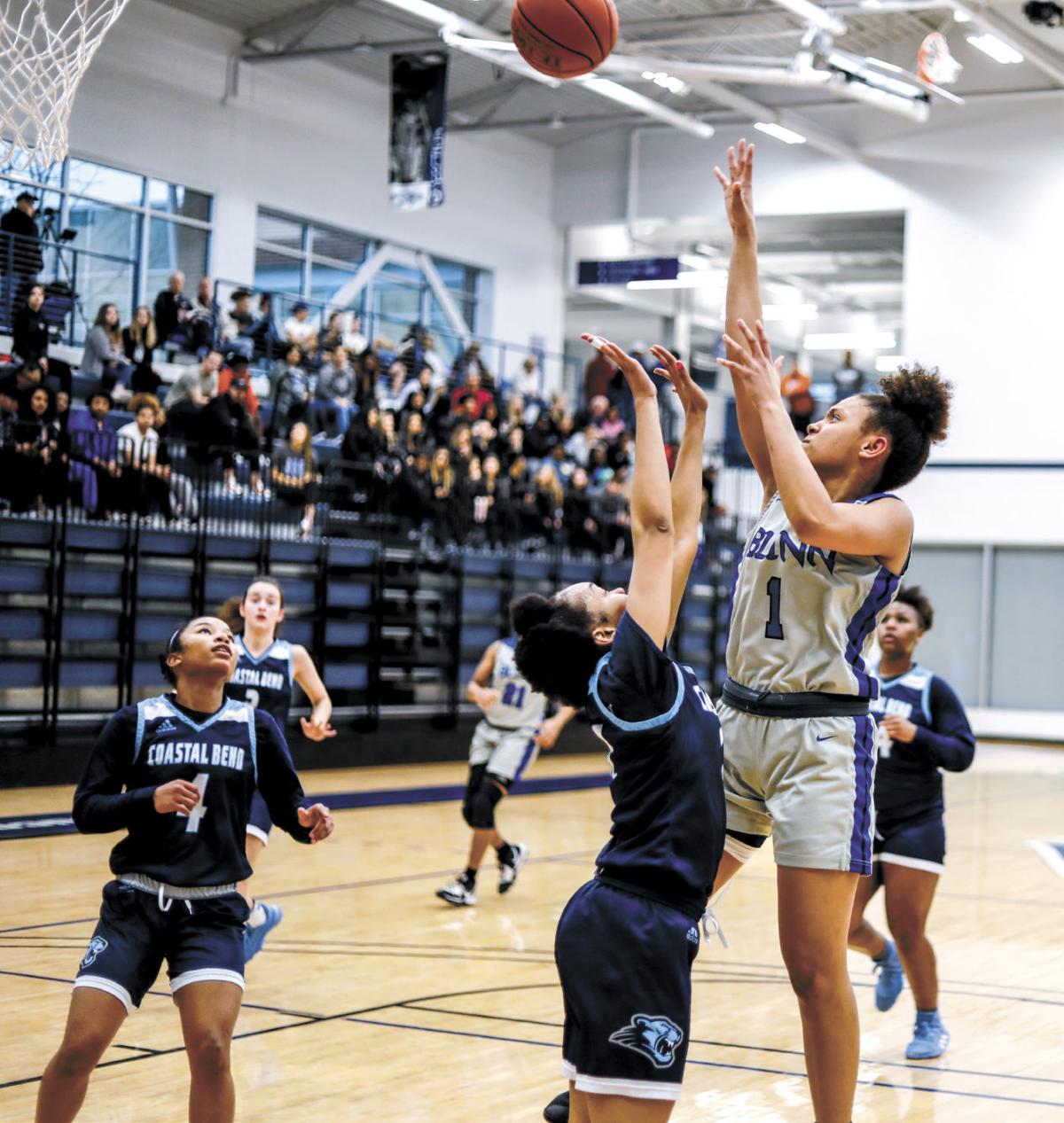 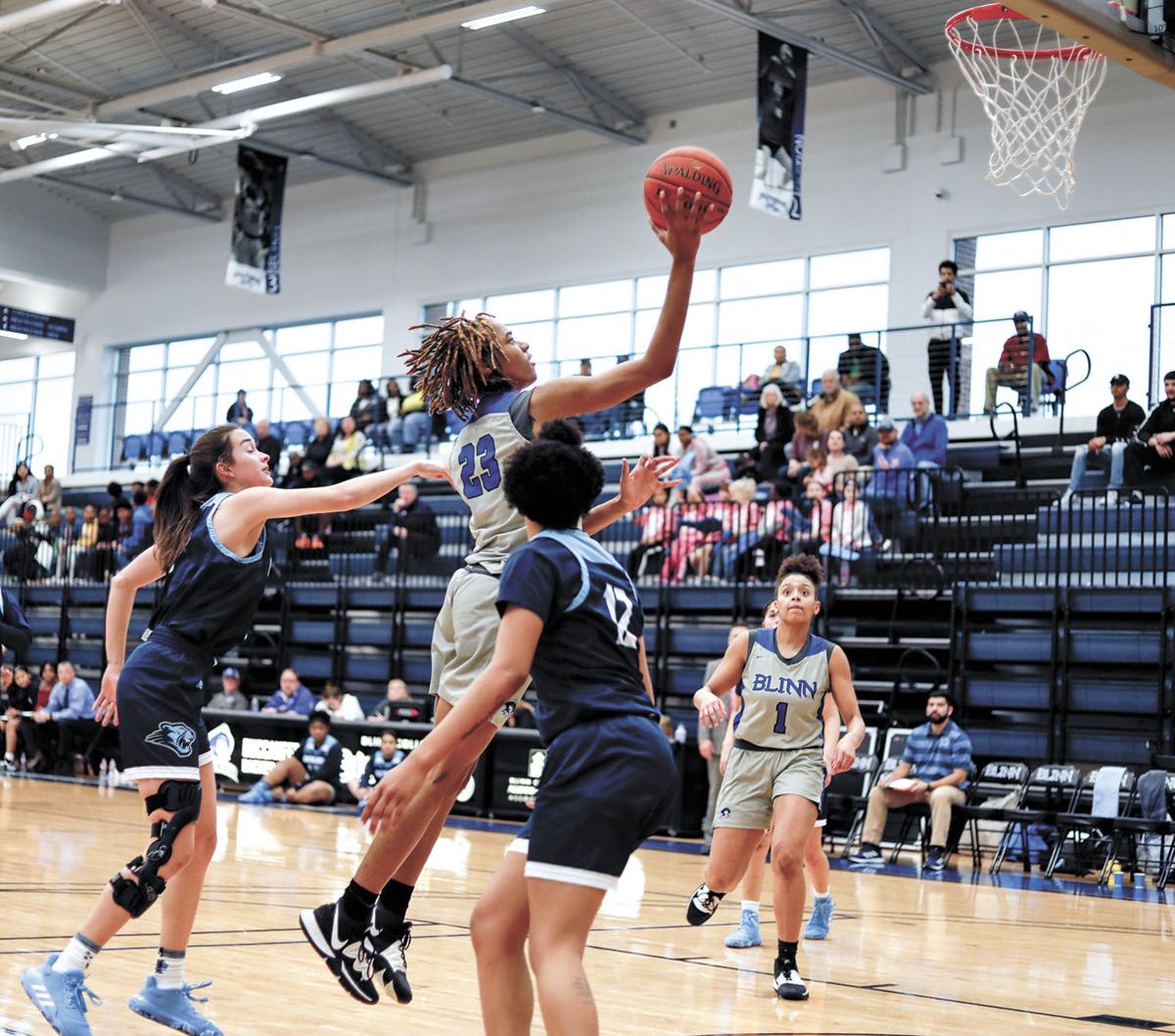 Blinn College’s Kristine Ezimako (23) drives to the rim for a layup between Coastal Bend’s Aubrey Guerra and Cassie Hogan (12) during a Region XIV basketball game here Feb. 12 at the Kruse Center. 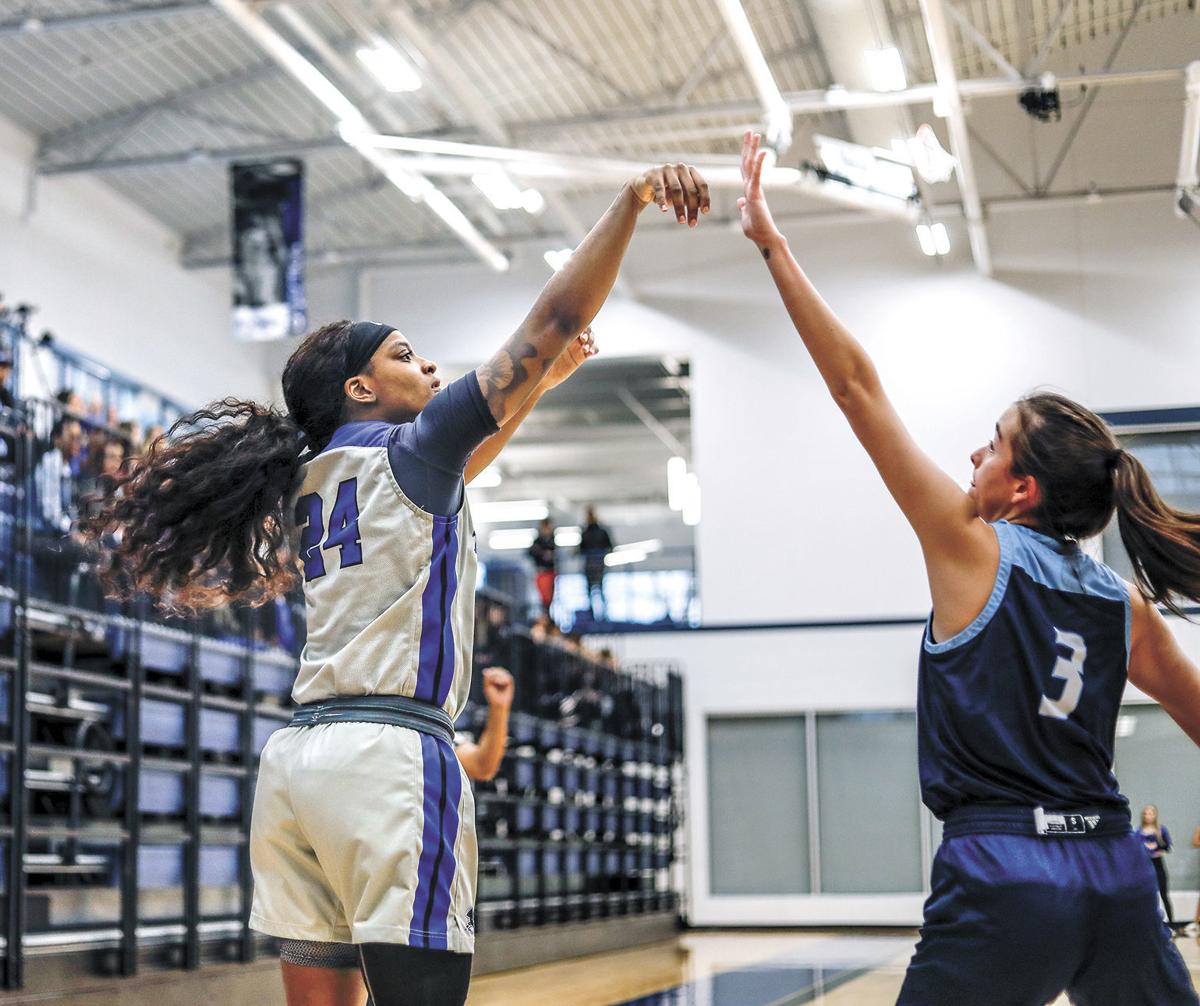 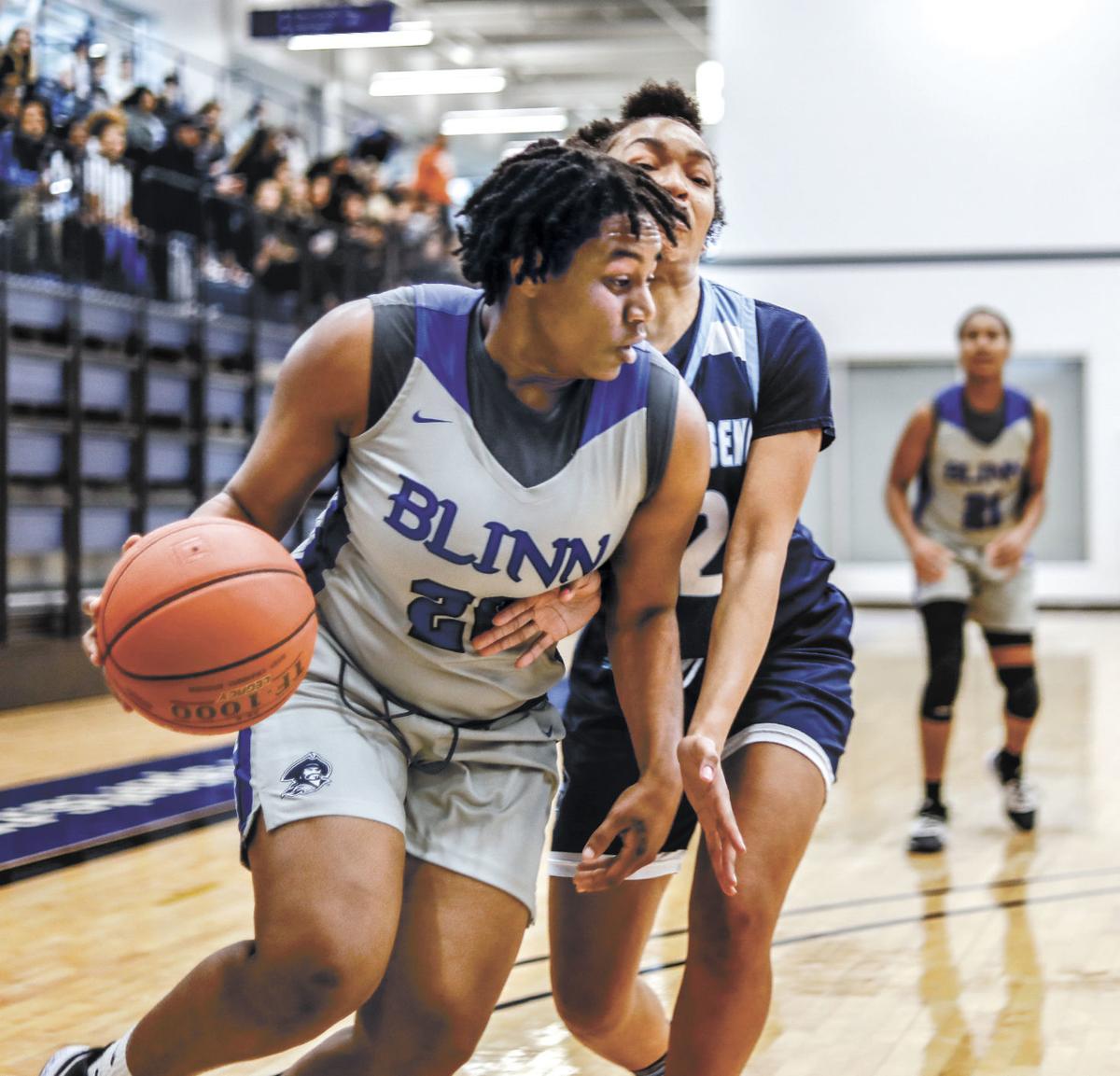 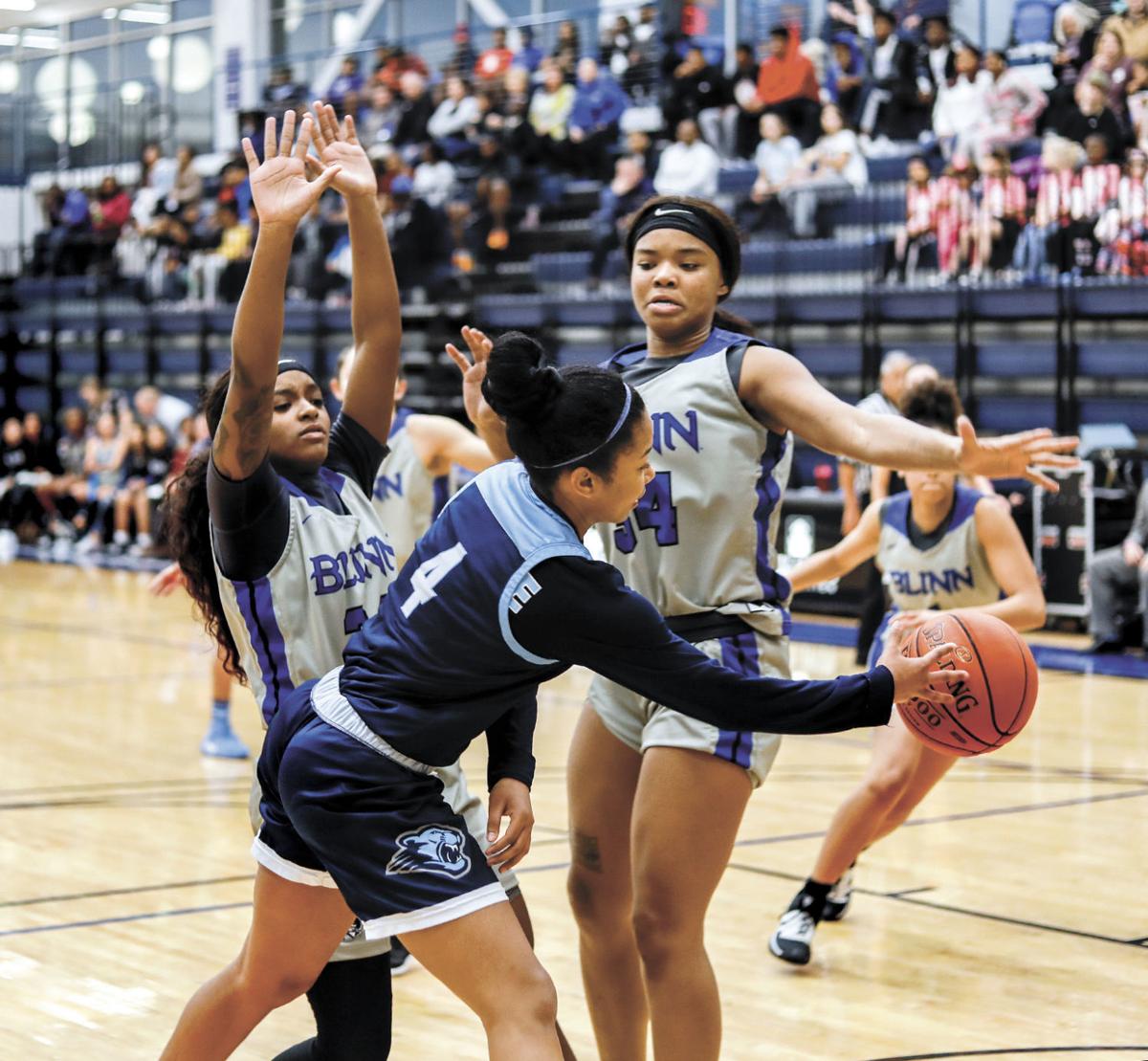 Blinn College’s Mia Cherry pulls up for a jumper during a Region XIV basketball game against Coastal Bend here Feb. 12 at the Kruse Center.

Blinn College’s Kristine Ezimako (23) drives to the rim for a layup between Coastal Bend’s Aubrey Guerra and Cassie Hogan (12) during a Region XIV basketball game here Feb. 12 at the Kruse Center.

Blinn College’s 33% conversion rate from beyond the arc wasn’t enough to scare Coastal Bend into defending beyond the perimeter, so the Buccaneers showed no fear in firing away from long distance all night.

With the visiting Cougars opting to load the paint with defenders for most of the night, 24th-ranked Blinn used 12 3-pointers, a barrage of second- and third-chance points and speed-fueled transition bucks to dismiss Coastal Bend 96-60 in a Region XIV clash here Wednesday night at the Kruse Center.

The triumph was the Buccaneers’ 20th of the season as they improved to 20-5 and 9-4 against region opponents. The 20 wins are Blinn’s most since it went 26-9 during the 2015-16 campaign, prompting 18th-year head coach Jeff Jenkins to offer his players his gratitude following the game.

“We play a really tough non-conference schedule with the McLennans, Collins Countys and Temples; we play a really tough non-conference and then our region is just so good,” Jenkins said. “It’s been three years; that’s what I told them. We won 19, 15, and then 12 last year; so they’re the first team in four years to get 20, and I really had to thank them for bringing Blinn back. It was a long three years.”

Thanks to some early offensive woes, the Buccaneers made the trip to No. 20 just a littler bit longer.

Blinn didn’t reach the scoreboard until Mariel Wade sank a 3-pointer at the 8:35 mark of the first quarter, and team-high scorer Mia Cherry (17 points) followed with a triple of her own to make it 6-0 early. But neither team appeared eager to score points, as neither team would find the basket again until Coastal Bend (2-23, 1-12) got a free throw from Olivia Chisolm with 5:06 left in the period.

From there, however, Blinn kicked things into high gear with a 10-0 push that all but sealed the outcome with 33 minutes to go.

Alanna Spencer knocked down two 3s around a layup from Kristine Ezimako and a runner from Cherry as the lead grew to 16-1 with 3:12 to go in the opening quarter.

The Cougars would show some life and outscored the hosts 8-7 in the final three minutes of the first, but still trailed 23-12 entering the second quarter.

“Our offense kind of started off pretty slow, but once we start getting together and playing good on defense, that turns over into offense and that really gets our offense going,” Cherry said. “We just kind of feed off each other, and once someone hits a big shot and once someone makes a big play we’re able to feed off of that and get things going in the right direction.”

Layups from Gabriela Bosquez and Hailey Atwood opened the second period as Blinn’s cushion grew to 27-15 less than two minutes in, and after a runner from Coastal Bend’s Cassie Hogan cut the visitors’ deficit to 32-23, Atwood took over.

Her putback with 3:26 left in the half sparked a 14-5 run, and the freshman from Austin did most of the damage as the Buccaneers pulled away emphatically. Atwood scored 13 of her 15 points in the period, and aided the big run with a steal-floater combo, another putback, a trey with 39 seconds remaining and a layup in the final seconds that made it 46-28 at the break.

“I would just say it’s effort,” Atwood said of her big second quarter. “When your teammates shoot, our coach always tells us to go get the offensive rebound. So I just went and did that.

“I think it was mainly just effort and hustle. Those are things that coach teaches us every day to do. So I think that’s what really took over; it was nothing special.”

Cherry added a 3 during the move as well.

The onslaught continued into the third quarter as Keaundra Eddings hit two free throws and converted a steal into a layup that pushed the lead to 50-28 early in the second half.

Ezimako’s putback preceded a jumper from Bosquez, and a Jenessa Souza 3 kept things going for the hosts before Atwood and Bosquez combined for three makes from the free-throw line.

Atwood said she was impressed with her teammates’ ability to knock down shots from all over the floor Wednesday night, and said she was a little surprised Coastal Bend gave the Bucs as many looks from downtown as they did.

Not that she minded.

And defend, Blinn did.

The Buccaneers entered the fourth quarter with a 79-39 cushion and the Cougars wouldn’t crack the 40-point threshold until Hogan’s layup until the opening minutes of the period.

With the game in hand, Jenkins was able to empty his bench, and five Buccaneers either reached or came close to scoring in double figures.

Following Cherry and Atwood were Wade, who matched Atwood with 15 points. Ezimako tallied 12 and Spencer chipped in nine. Eight other Buccaneers also found the net for Blinn.

“During that fourth quarter we were able to play a lot of girls who don’t get a lot of minutes this time of year because our region is so tough,” Jenkins added. “We do have 16 good players. We do have scholarship athletes and they play hard and I’m glad they got to compete in the fourth quarter.”